Worldcon or more formally World Science Fiction Convention, convention for science fiction fans, historically focused on the literary aspects of the fandom. It's held annually in a city chosen two years in advance at an earlier Worldcon, most often in the United States. The convention is organized by the World Science Fiction Society (WSFS), under a constitution which is revised and ratified at several Convention Business Meetings during the course of the con.

Members of the Convention can choose the winner for the annual Hugo Award, and the location of a future Worldcon.

Membership in the WSFS is restricted to a specific convention. A supporting membership is offered for people who wish to vote in the Hugo Awards and can not attend the convention itself.

When in held in North America, Worldcon used to rotate between three regions:

As of 1999, the location requirements have eased: "[a] site shall be ineligible if it is within five hundred (500) miles or eight hundred (800) kilometres of the site at which selection occurs."[3]

When Worldcon is held outside North America, the North American Science Fiction Convention steps in to offer a regional convention for the region in which Worldcon would have been held.[4]

When countries or cities want to host Worldcon, they put in a bid two years in advance.[1] Members of the World Science Fiction Society (WSFS) vote on the location and are generally encouraged to consider criteria for the site such as being close to home, being a great location for people to visit, or having the best committee who will host the best convention. [2] Members who vote also then are required to support the con for which they vote, which includes buying a Supporting Membership for the host city.

Proponents of a specific location for a future Worldcon start several years in advance, gathering information about their choice of hotels, potential Guests of Honor, and other necessary details. They host parties at several other conventions where prospective members attend, raising funds and persuading people to vote for their location.

The Convention Annual No. 3 – DisCon Edition 1963 was edited and published in 1964 by fan photographer Jay Kay Klein. Its 104 lithographed pages are reproduced on good-quality white bond with cardstock covers. It contains nearly 300 black and white photographs taken at the 1963 World Science Fiction Convention (Worldcon) in Washington, DC. In addition to the many photos, the volume contains the following articles: “Some Notes on Conventions and Where They Are Held, or A Blow for Freedom,” by Robert A. Madle, about the Worldcon “rotation system”that ensures they will be held in locations all over the U.S. and abroad; “First Fandom at D.C.,” by Don Ford, about the activities of First Fandom and its members at the DisCon; “Con Report,” by Dave Kyle, a 9-page account of the DisCon from Kyle’s point of view; and an introduction and an article, “DisCon Fandago,” by Jay Kay Klein.

Klein has been known for decades as one of the most devoted photographers at science fiction conventions, and this volume is one of four produced in the ‘60s. The others cover the 1960, 1962 and 1966 Worldcons in Pittsburgh, Chicago and Cleveland, respectively. 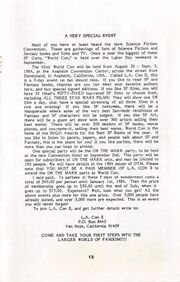 A 1984 flyer tailored for Star Wars fans: "Most of you have at least heard the term Science Fiction Convention. These are gatherings of fans of Science Fiction and fantasy books and films and TV. Once a year the biggest of these SF Cons, "World Con," is held over the Labor Day weekend in September. [...] COME AND TAKE YOUR FIRST STEPS INTO THE LARGER WORLD OF FANDOM!!!!!"

Over the years, a few panels have been hosted regarding FanFiction:

North American Con, the one in San Juan PR a few years ago had Paula Smith as Fan Guest of Honor. Also, check Winnipeg Worldcon 1994 had several fan panels, including one on slash with Clive Barker.[7]

For the most part, fan vids have received little acceptance or welcome at WorldCons, even as the Hugo Categories branched out to include non-written works (ex: fan edits, film or TV). However, on a few occasions fans were able to secure panel spots to discuss or showcase fanvids.