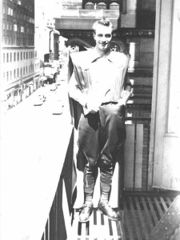 Ackerman in 1939, wearing a futuricostume.

Forrest J Ackerman (November 24, 1916 - December 4, 2008) was an early science fiction fan who remained active in fandom for many decades. He also wrote sf, but is better known as a fan who promoted science fiction and as a literary agent for science fiction authors. He was extremely well connected. He coined the term sci fi and is credited as an early costuming pioneer by wearing a hall costume created by Morojo at the first Worldcon in 1939. He was the founder of Famous Monsters of Filmland Magazine and a member of the Fantasy Amateur Press Association.

Ackerman was the owner of the world’s largest collection of sf/horror memorabilia and movie props. The legendary collection was on display in his Los Angeles home known as Ackermansion where he also gave public tours. Following Ackerman's death in 2008, his collection was sold in 2009.[1]

In 1966, the LASFS established the annual Forry Award and named it after Forrest J Ackerman. The award is presented for lifetime achievement in the field of science fiction. The first recipient was Ray Bradbury and in 2002, Ackerman himself received the award.[2]