Nine Worlds Geekfest was a multi-media, multi-genre residential pop culture convention held annually in or near London, UK. The first three were held near London Heathrow Airport, in different hotels, while the 2016, 2017 and 2018 conventions took place in the Novotel in Hammersmith, London.

The focus was mainly on fans interacting with one another, although there were also appearances by celebrity guests, book signings and performances. Content was arranged in a number of themed tracks, including general topics such as fanfiction, fannish academia, cosplay and books, as well as tracks for specific fandoms.

The first Nine Worlds was partially funded by a Kickstarter[1] which was launched in February 2013. It was pitched as "an unconventional convention" and described on the Kickstarter page as "a residential con celebrating all aspects of geek culture. Gaming, film, cosplay, anime, literature, and partying!". The campaign achieved more than double its funding goal of £10,000.

We're a group of fans putting together a weekend-long, multi-genre convention in London this summer, August 9th-11th. We're running this Kickstarter to raise funds, offer cheap advance tickets, and make sure people actually want to come. Judging from our success so far, it turns out people do want to come, but we still need your pledge to make this work.

Nine Worlds aimed to set itself apart from existing UK conventions like Eastercon and MCM Expo by "combin[ing] the size and star power of the commercial cons with the community ethos and strong slate of content found in fan conventions."[2]

The project was successfully funded on March 3, 2013 and the first Nine Worlds subsequently took place on August 9-11 2013.

The page listed an additional nine individuals as co-founders of the convention: Misha, Stephanie, Kath, Andrew Clarke, Anita Murray, Jenni Goodchild, James Tomlinson, Jon London and Tori Truslow. The Meetup group London On Board, which was helping to facilitate the con, was also listed among the founders.

The convention moved hotels while staying near Heathrow, before moving to the Novotel in Hammersmith.

After a couple of years of growing, the 2016 con included a separate expo for the first time, rather than the previously-included dealers' hall. This had a big vision, but was rumoured to have lost money and have very few guests who weren't at the main con. One of the original founders, Dan, confirmed that it had lost them a lot of money, and required two years of "steady steering" to bring the con back on track.[4]

Commitment to Diversity and Safety 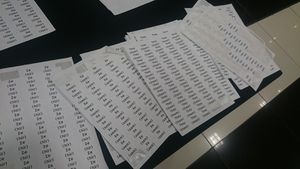 One of the hallmarks of Nine Worlds was its commitment to making the convention as welcoming as possible for all attendees. Measures included a detailed anti-harrassment policy[5] and accessibility information[6], a communication preferences system[7] and participation in Con or Bust.[8] There were also dedicated tracks discussing Race and Culture, LGBTQ themes, and other aspects of diversity. Panellists and moderators were encouraged not to assume someone's gender without asking, and pronoun stickers were provided to all attendees.

A newcomer on the con scene, Nine Worlds held its inaugural event last summer, but the buzz about it is tremendous – perhaps partly because of its up-front policy of trying to disprove the hoary old cliche that science fiction is the preserve of the middle-class, middle-aged white male or – heaven forfend – the spotty teenage loner in his bedroom.

"Traditionally, con-goers are seen as the cliche – white, cisgender men," says Claire Powell of the committee. "This can lead to people who don't fall into that category feeling intimidated, or maybe even at risk. At Nine Worlds, diversity and inclusion are hugely important foundations for the event. Specifically, it aims to dump the sexism that infests many geek spaces and sci-fi cons. There is a strong anti-harassment policy and Nine Worlds endeavours to maintain a safe space for women, LGBT+ people, disabled people, and other groups that are often marginalised at geek/fandom events." [9]

The Cabaret on Saturday night quickly became a key event at Nine Worlds. It included music, dance performance, stand-up comedy, poetry, and in 2014 an on-stage proposal. It had a mixture of serious content and lighter entertainment. It was followed by the disco, with much geek-themed music.

While reviews for the convention were relatively good, the 2018 Nine Worlds was beset by problems. Panel hosts complained that the organization for that year was poor, with many not knowing who was on their panels or when their panels were until a few days before the con. Writer Jesse Panic documented many of the issues, including the unaffordable ticket cost, months and weeks with no contact, short notice on moderator and participant guidelines, and inclusion of police officers plus a journalist associated with neo-nazis as speakers.[10] Other panelists, such as Skye and Rammi, weren't given contact details of their fellow panelists until the schedule went live, and when they had issues with a police officer being on a panel regarding intoxicants, their complaint was mishandled and they stated they were told:

Regarding dropping participants from Intoxicants in Fiction. After talking this through in the organising team, we consider [The Police Officer] to be an appropriate panellist for this item, and do not intend to remove her. If this makes you uncomfortable about moderating, please let us know and we’ll ask one of the other panellists.[11]

Issues surrounding race were also raised. Complaints came after panels involving police officers speaking in their capacity as police were arranged in 2017 and 2018 despite protests from POC. Racism was not a new complaint - volunteer a-simple-tailor described on Tumblr a 2016 incident on her immigrant narratives panel, where when she was telling a story about her uncle pioneering surgery on babies, a last-minute panelist stated "well your uncle should have learned English then", and proceeded to upset both panel members and attendees.[12] Blogger blackfemgeekery raised the issue that the committee behind Nine Worlds 2018 was almost entirely white, which she stated contributed to the problems surrounding panelists. When blackfemgeekery asked the committee about this in the Future of Nine Worlds panel, neither she nor many others in the audience felt they gave an appropriate answer, especially after blackfemgeekery was accused of no-platforming the police.[10]


They wanted police to feel welcome, and if POC and others felt unwelcome, it seemed like that was our problem. That was my answer as far as I was concerned.[13]

There were also issues relating to the mistreatment of attendees - Jesse was forced to relive racial trauma after a white volunteer attempted to argue with them and minimize their experiences as a POC, and was forced to tears after being surrounded by volunteers.[10]

There also came complaints of accessibility during Nine Worlds 2018. While accessibility was generally very good, the mismanagement of con attendees meant that rooms were overcrowded; as a result, attendees would sit on the floor next to accessible seating, restricting the ability of the people using those seats to leave the room if needed. There was also issues with ableism from other volunteers, despite training and policies being created to avoid such behaviour, as documented by a-simple-tailor.[12]

During the Future of Nine Worlds panel, the committee announced that they were reconstituting the con due to burnout and mismanagement of volunteers and staff, as well as issues with money.[4] After criticism of the 2018 con emerged, the Nine Worlds committee responded in a twitter thread, apologising for causing people pain and not acknowledging problems with inclusion, while also requesting feedback to improve in the future. [14] One of the con's founders, Dan, also posted a personal apology on Medium. [15]. Despite this declaration, several months later former committee member quizlacey stated that there was no detailed plan for reconstitution, and that the process had been severely mishandled.


The first is that the detailed plan for reconstitution has not taken place, and the reconstitution process currently is a slightly-more-complex version of "whoever wants it can have it."

The second is that because no process has taken place and no governance/management/steering/whatever committee has been identified, the provisional hold on the Novotel for 2019 has had to be released.

I left due to the state fo the reconstitution process. With the issues that have been ignored by former management for so long, which were very publicly and very badly mishandled at the end of 2018, I want to be part of a structure that is capable of addressing them.

I left Nine Worlds 2018 on the understanding that this would be one of the key criteria for the new incarnation of Nine Worlds. Treating the convention like a hot potato gives me no confidence that this will be inbuilt structurally from the start.[16]

On December 22nd 2018, Nine Worlds announced that a new governance team had been formed, none of whom had worked on Nine Worlds in a committee capacity before. Nine Worlds also announced a return to the con in 2020.[17]

In September 2019, the new management team announced that they would be unable to take Nine Worlds forward due to a lack of skills in managing the con, and the inability to locate a company director for Nine Worlds Ltd. [18] They ended the thread with a request that anyone who was interested in becoming director to contact them, otherwise if no director had been chosen by the end of September, the process of closing the business would begin. As of December 2019, no announcement had been made regarding the closure of the business, nor of the appointment of a new director.

Such Heights, a vidder, and usuallyhats hosted several fan vid shows or panels in the FanFiction panel track.

I've done a bunch of vidshows at cons lately! Please find the playlists below for Nine Worlds and the first of two vidshows I'm doing at Worldcon. [19]

"Marvel by [31]]lim (MCU)
Never Look Away by [32]]purplefringe
Heavenly by [33]]bananainpyjamas (Avatar: the Last Airbender)
Hold Me Now by (Princess Tutu)
Level Up by [34]]such_heights (Buffy the Vampire Slayer)
Keep The Streets Empty For Me by [35]]chaila (Twilight)
Hey Ho by [36]]thuviaptarth (MCU)
With Blood by [37]]beccatoria (Mass Effect)
Flow by [38]]lim (Multi)
Hands Away by [39]]chaila and [40]]beccatoria (Fringe/Terminator: the Sarah Connor Chronicles)
This is the Picture by [41]]obsessive24 (Whedonverse)
we were born in a summer storm by [42]]raven (Welcome to Night Vale)
Elysium by Pteryx (Sherlock BBC/Doctor Who)
The Final Hour by narvinek (Buffy the Vampire Slayer)
Gorgeous by [43]]cupidsbow (Hugh Jackman RPF)
Taking the Hobbits to Isengard by Erwin Beekveld (Lord of the Rings)
Malcolm by [44]]opportunemoment (The Thick of It)
Star Trek Dance Floor by [45]]sloanesomething (Star Trek XI)
Hourglass by [46]]giandujakiss (Multi)
Baby, I'm A Star (The Fresh Prince of Bel Air)
Soccer Practice by [47]]bironic
Flawless by [48]]kiki_miserychic

I ran two vidshows at this year's Nine Worlds - a Star Trek show co-curated with usuallyhats, and the now-annual evening fanvid show on the fanfic track.[20]

Friday: Fanvid Showing - Amy returns with a roundup of the year’s fanvids


VidUKon 2015 Intro by [66]m_a_r_i_k_s
You're My Mission by [67]]meivocis (MCU, Captain America: the Winter Soldier)
Take Me To Church by [68]]lithiumdoll (Person of Interest)
Through the Deep Dark Woods by [69]]anoel (How to Get Away With Murder)
Never Look Away by [70]]frayadjacent (Buffy)
Wasteland by [71]]amnisias (Grantchester)
Blue/Pink by [72]beccatoria (Steven Universe)
Repetition by [73]]thuviaptarth (MCU, Iron Man)
Weapon of Choice by [74]]usuallyhats (Multifandom)
Elastic Heart by [75]]jocarthage (Mad Max: Fury Road)
Walking 2 Hawaii by [76]]isagel (MCU, Guardians of the Galaxy)
Singing Hallelujah by [77]]leanwellback (Singin' in the Rain)
This Is What It Feels Like by [78]]sdwolfpup (Selfie)
Fly by [79]]such_heights (Multifandom)
Afterlife by [80]]sanguinity (The Middleman)
Gone Tech by [81]blithesea (Almost Human)
Dynamite by [82]]elipie (Brooklyn Nine-Nine)
Help! by [83]]purplefringe (Sleepy Hollow)
Let Yourself Go by [84]]Andraste (Miss Fisher's Murder Mysteries)
Workin' It by [85]]brokenmnemonic (Magic Mike)
Kinky Neighbours by [86]]thingswithwings (Batman 1966)]