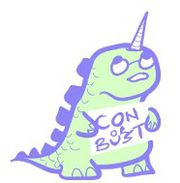 Con or Bust is a non-profit organisation administered under the umbrella of the Carl Brandon Society[1] for the purpose of assisting fans of colour in attending SFF conventions.

Con or Bust was created in 2009, in response to the unpleasantness of RaceFail '09. The stated goal was to help fans of colour attend WisCon. Through an auction and donations enough money was raised to help nine fans of colour to attend the convention.

Con or Bust funds are collected through donations and an online auction held in February each year. From 2011 onwards, funds have been awarded to fans of colour wishing to attend any convention, not just WisCon.

From July 2011 through the first quarter of 2012, additional funds were raised to help nine people attend other conventions.

The 2014 auction and associated matching challenge raised $16,476. These funds, together with the remaining funds from the prior year, funded assistance for April 2014 through March 2015. As of September 2014, 28 people have been helped to attend nine different conventions.

In 2015, John Scalzi ran a charity drive for Con or Bust, agreeing to produce an audiobook of John Scalzi Is Not A Very Popular Author And I Myself Am Quite Popular if $2500 in donations were raised;[2] over $10,000 was raised, and the audiobook was released for free on Scalzi's blog.

The Con or Bust logo is a Dinocorn, referencing the supposedly mythical status of fans of colour.