John Scalzi Is Not A Very Popular Author And I Myself Am Quite Popular: How SJWs Always Lie About Our Comparative Popularity Levels is a parody book, written in reaction to Puppygate and Vox Day's book SJWs Always Lie: Taking Down the Thought Police, as response to the 2015 Hugo Awards Puppygate controversy.

The author of the parody is listed as Theophilus Pratt, but is widely believed to be the listed editor, Alexandra Erin. 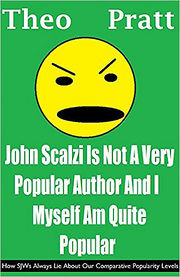 At barely $1 per chapter five this book is incredibly good value. Pratt could increase the price by at least 10 times and it would still have more chapter fives than John Scalzi's "The End of All Things"; which, as Theophilus Pratt eloquently proves, nobody has ever read.[1]

John Scalzi agreed to record an audiobook if $2,500 in donations were raised for Con or Bust; over $10,000 were raised, and the book was released on his website, both as a 40-minute complete book and in separate chapter files, in August 2015, and are available for free downloading.[2]

Pro-Vox Day Parodies of the Parody

The conflict kicked off a series of parody anti-Scalzi anti-SJW ebooks: Amazon.com has become a new activist platform, as reported on the pro-Vox Day Brietbart.com. [3] These include: