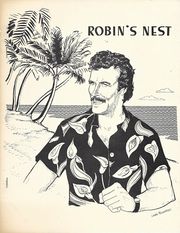 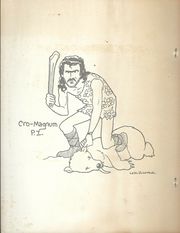 back cover of issue #1, Leah Rosenthal 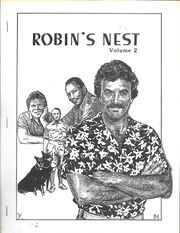 A submission request in Universal Translator #23 says this issue was to contain "The Tiger" by Jude Wilson.

There were two meaty stories in this zine, although I'd not class either of them as a rock'em sock'em adventures of a private eye. Both were get-to-know-the-character stories. My favorite was 'Yesterday's Shadows.' The author took the reader on a trip into Rick's past and then had that past come out and haunt him in the present. It was a well-written, tightly-woven story. I also liked 'Prisoners of War'. The author's handling of Magnum was well done. I found the medical descriptions chilling. She seems to know her stuff in that department! The rest of the zine, roughly half, was taken up by some very good shorter stories, a nicely done episode guide, a few cartoons, a smattering of poetry, a brief editorial, and a few pages of locs. Some of the short stories were excellent. I especially liked "Another Rotten Day in Paradise.' I refuse to try to tell you anything about it, it might ruin the story. 'August 8th' was also good. Magnum's exploits in trying to find out about his birthday party were well thought out and in character. 'Penny Thoughts' was a nice little piece of Higgins' relationship with Magnum but I found her characterization of Magnum a bit too childish. Of course, he does act that way at times! 'Still Counting' was okay. I really liked her other story much better. 'Heart to Heart' was also okay, but had Higgins a bit too emotional for my taste... The poetry was all pretty good, though by my admission and I am not a poetry expert. I did find the ones written in 'Hawaiian' difficult to understand but interesting in their odd dialect. The cartoons all gave me a good giggle, especially Leah Rosenthal's little voice one at the beginning. Onto the artwork: The cover is splendid. Karen river did a marvelous job and her artwork in this zine is a joy. Christine Myers' one illo was very nice, as were Burnsides and Kurz' The rest of the illustrations were good and solid. There were none that were a detriment tot eh story. As far as the technical aspects of the zine went, I only had a few minor complaints. The lack of indentation at the beginning of new sections too a bit of getting used to. Also, the print was a bit, well, fuzzy and pale. It was not hard to read, but it did bother me a bit at first. However, I only found a few typos in the entire zine. Me thinks the typist was very good, or someone has a spelling checker for their computer! All in all, an excellent zine. A must for any Magnum fan. I enjoyed it greatly, and will read some of the stories again, a rare thing for me to do. [1]

A handsome zine dedicated to the Magnum PI tv series. Focus of stories range from spotlighting individual characters ("Yesterday's Shadows" - Rickj "Heart to Heart" - Higgins) to heavy drama ("Still Counting," "Prisoners of War"). Humor abounds also in cartoons, limericks, and stories ("Another Rotten Day in Paradise"). Beautiful art and an episode guide that covers the first five years up to the Feb. '85 aired shows, with the rest to be continued in the next issue. Most outstanding piece to this reader was the clever island dialect applied to a jair of poems by Karen Mitchell. Also; a trivia contest on the opening credits! A hefty zine at 160 pages. [2] 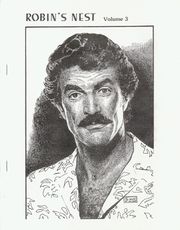 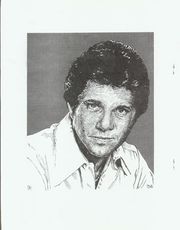 Robin's Nest 3 was published in 1986 and contains a 146 pages which includes a crossover with Airwolf. 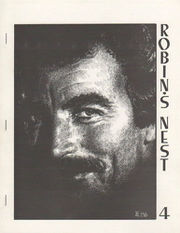