Fiawol, or, How to feel at home in a purple wig and a cape

Fiawol, or, How to feel at home in a purple wig and a cape is a 1978 essay by Joanne Papin. 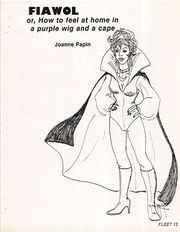 The essay is a tutorial for other fans who needed some mentoring in the ways and customs of fandom, as well as a discussion of fandom and fanworks as folklore.

Once a year, from all over the world, hundreds - no, thousands - of people, in cars, buses, trains, and planes, flock to a lucky predetermined city to attend an enormous family party. There are a select few who know each other from previous years, some (in)famous names almost everyone knows, but many have only met through letters and most have never even heard of each other. But though they may not be related they are still part of the family. And that family party is called World Con.

Long ago, there was literature. And some of that literature was about fantastic events, incredible journeys, and strange and exotic peoples. This was fantasy. After a time, the new god, Science, came into dominance on the Earth and, combining with fantasy, produced science fiction. Now, where fantasy had been accepted by the intelligentia, science fiction wasn't, mainly because of its inauspicious be ginnings as pulp fiction. And after a time, those people who read science fiction began to feel the wall of solitude which cut them off from the outside world. They began to wonder if there were others, equally lonely, who also read science fiction, and they began to write letters to the science fiction magazines in search of one another. Soon, they wrote letters to each other without the use of the magazine as middleman. A few - very industrious - began to put together amateur magazines containing stories, criticism, personal opinion columns, and, of course, letters. They used mimeo, xerox, and even off-set printing. And an they gained confidence, art work began to appear in these odd little productions. Now, these people, young and old alike, began to feel a common identity. They began to wish for a chance to really meet each other, sit down and talk in a back and forth exchange that could not be accomplished in a letter. Finally, the first science fiction convention was conceived. It was so popular that soon every major city, and many minor ones as well, had at least one convention a year. And, for the past thirty-six years, the most important science fiction convention has been World Con.

The above is a treatment of the creation of fandom as a storyteller might tell at a science fiction convention. Basically, though somewhat romanticized, it is a fairly accurate account of the beginning of what is called fandom, and will serve as an excellent introduction to this article.

There are, of course, side-channels of fandom which can be classified as popular culture in stead of folk culture. The majority of Star Trek fandom, for example, has been materially exploited to the point of causing considerable distaste for it in the mainstream. Another fannish sub-culture which can be characterized as a popular mass culture is comic book fandom whose root is science fiction and fantasy and whose essence is the comic book.

There is another reason where by fandom could be discounted as a folk culture. According to most classic definitions of folk culture, the traditions of the group are passed on through word of mouth and imitation, and are never recorded, except by folklore scholars. In the fannish culture, however, there is a great deal recorded and passed on in this form, because of the letter and amateur maigazine writing that are part of fannish tradition. However, the very problem is the resolution in this case. The wealth of written material in fannish culture is part of fannish traditions, mainly falling in the material category, but also to some extent as part of the customary category. Add to this the geographical spread of fandom,and one begins to appreciate the possibility of a literary inclined folk culture.

Then, there are the stories which are told at the cons by the older fans, of the beginnings of fandom (the story I opened with is based on a story I heard in 1976 at WindyCon 3), stories about fan and pro editors, of other cons, and of other fans. One of the most intriguing story topics is Harlan Ellison, a tru-fan turned professional writer, and very successfully, too. Harlan, who is infamous among fandom and mundane world alike, can be seen once or twice a year on the Tomorrow show, being interviewed by a cowering Tom Snyder. Snyder can usually be seen after one of Harlan's visits counting up the number of lawsuits Harlan has provoked and praying that the network won't fire him because of the way Harlan tore apart television this time. Harlan Ellison, once called the "Godzilla of Munchkinland" by his fellow science fiction writer David Gerrold, can be likened in many respects to the fannish lore counterpart of Trickster, a basic character in Amerind folklore. There are obviously many differences, but the resemblance runs deep. Unfortunately, Harlan, though a mythical character, does exist.

In this same category [as a con film room], but often in the panel room, is the production of a science fiction acting workshop, such as the Armored Star Ham Kosher Radio Nostalgia Review, which presented "Natch Kolatsky. Interplanetary Adventure" complete with commercials, or Mobius Theatre's latest satire, "Stage Wars: or, Who's Biggs?", or one of the infamous dramatic cartoon slide shows, such as "The Capture," the story of what would happen if a science fiction con being held on a boat in the Bermuda Triangle was picked up by aliens (Alien Interrogator: "Do you read science fiction?" Projected answer: vague bewilderment. Actual answer: snickers and winks"), or "City on the Edge of Whatever," an insane take-off on Harlan Ellison's award-winning "City on the Edge of Forever" Star Trek episode which also satirizes certain parts of Chicago's disastrous "Strektacular" in .975.

It is often customary to hold a party in your hotel room late in to the night. This is where the majority of filksings that don't happen in the corridors around the con rooms occur. Then there are war gamers who hold D & D (dungeons and dragons) games and other more complex games, many of which may last the entirety of the con. D & D can

The final customary behavior patterns at con include masquerades - and not only the official "costume call" - where swords, capes, odd wigs and even odder skin colors are prevalent, and "freaking out" mundanes. This charming custom can include anything from a swashbuckling pair having an argument in an elevator (guaranteed to make people run out screaming at the next stop; I know, it worked in New York) to 5 people in odd hats and capes dancing by the reception desk in the main lobby with arms linked, sing

ing "Follow the Yellow Brick Road" (another one that's guaranteed to cause an interesting reaction among the "mundanes").

The third and final manifestation of a folk culture is the artifacts. Leaving aside the obvious artifact of the science fiction novel and prozine, which are more to the point in the popular and mass cultures, there still remains the artwork in those art shows, the fanzines and costumes, calligraphy and jewelry that is fan-produced with a science fiction theme. Even the filksongs themselves can be considered a form of artifact. And, of course, there are always the "plush people" produced by such fans as Pasha (Pat and Sharon) who make fantastic stuffed animals. Their most famous are the Hokas, "teddy bears" based on the tiny, intensely imitative ursine people of Poul Anderson and Gordon R. Dickson's stories. The most famous of these, Sherlock Hoka, who resides with a human named Lani who has a weakness for art auctions, has "chosen" Sherlock Holmes as his role model. There is a legend that says; "If a person at a con art auction holds Sherlock and (in cases of dire emergency) chews on his Hoka-sized deerstalker, she cannot lose her bid." Sherlock is a lady's Hoka; he doesn't work for the gents.