You may be looking for Saurian Brandy Digest.

Saurian Brandy Dandelion Wine is a gen Star Wars, Star Trek: TOS & "other media SF" anthology of fiction, humor, science, etc. Each issue is about 20-30 pages. It was published four times a year.

Dandelion Wine A mellow blend of Science fact, fiction, and more art, games, jokes, puzzles, and the fruit of the meadow.

So step right up and make it a double."

This issue of Saurian Brandy Dandelion Wine was published in January 1977 and contains 40 pages. 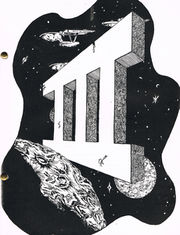 front cover of the January 1977 issue

"This special issue is published for the Puget Sound Star Trekkers "CON II" being held in Seattle, Washington on January 29 and 30, 1977. Contents include both new material and the most popular articles from past issues."

The argument is all about the nicknames for Star Trek fans, besides "Trekfan", "Freak", and "Them Nuts". "Trekkie" and "Trekker". Now in print it is generally "Trekkie". (From Gerrold, no less.) I do not know if this is only in the Northwest, but also used is the term "Trekker". Fine, Nifty. "A rose by any other name would smell as sweet." But, there are those who go into cardiac arrest at being deferred to as "Trekkies", preferring "Trekker" as they feel "Trekkie" is too close to the despised term "Groupie", and they consider themselves seriously. "Trekkie" does sound rather like a little girl clutching a Spock doll, but that's no reason to have a heart attack. Trekker, on the other hand, also sounds a trifle stupid. The 430-odd people of the USS Enterprise are trekkers, they are going somewhere. The rest of us who sit on our bums and watch them are trekkies, recipients of their trekdom.

Another view of "Trekker" Vs. "Trekkie":

So please, we have a certain image to uphold; therefore, in the name of Trekkers everywhere, correct friends, relatives, and newspapers when they carry out thoughtless acts.

Saurian Brandy Dandelion Wine 4 was published in March/April 1977 and contains 22 pages. The cover is by Bill Warren. 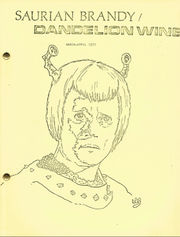 Saurian Brandy Dandelion Wine 5 was published in May/June 1977 and contains 33 pages. The cover is by Kaija Berleman. 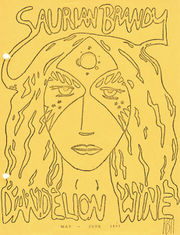 Saurian Brandy Dandelion Wine 6 was published in July/August 1977 and contains 33 pages. The cover is by Bill Leiren. 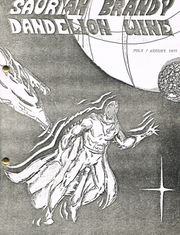