How Much is that Harlequin in the Window?

How Much is that Harlequin in the Window? is a 1976 essay by Paula Block.

It was printed in Warped Space #15. A similar essay is Ellison Wonderland: A View from Trekland (1974) by Sharon Ferraro. 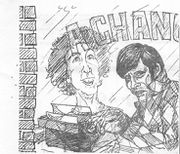 detail from the first page of this essay as it was printed in Warped Space, illo by Gordon Carleton. It portrays Harlan Ellison and Paula Block 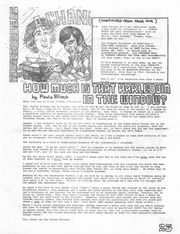 first page of the essay in "Warped Spaces"

The subject of the essay is her visit to A Change of Hobbit bookstore, and her interaction with Harlan Ellison.

Yes, Harlan Ellison can be bought, but only if you've got the bread or the legs to get it. I got neither. But I do have a copy of his latest short story, one of the ones he wrote in the window of A Change of Hobbit, a nifty little bookstore located in Los Angeles, near UCLA. A Change of Hobbit is a rarity — a bookstore catering to speculative fiction freaks. They carry everything from Harlan Ellison's lovely warped tales to the latest STAR TREK Log by Alan Dean Foster. They're not especially pro-Trekkies though, but that's to be expected. Most sf genfen aren't.

Anyway, I got Harlan's story by buying $10 worth of merchandise in the store while Harlan sat in the window typing. Now, why he was in the window typing was generally for publicity purposes, both for Harlan and the store. Can't fault them for that. After all, it isn't every day you get the opportunity to see the one and only Harlequin in a bookstore window, no matter why he's there.

Quoth the Man: "I am not Paula Smith." This in response to my showing him the letter column in WS14. Harlan also wished me to relay the following corrections to Sharon Ferraro's letter; (1) he is 5'5" and not 5'4", and (2) his eyes are blue and not brown. As for not being Paula Smith, well, I wouldn't argue with him to his face but I've never seen the two of them together so I still have my doubts.

He typed a bit more on his latest story ("Mom"— about a young Jewish man haunted by the ghost of his Portnoyish mother— very amusing) and I asked the folks working at the shop what they expected Harlan's originals of the stories (to be auctioned off at an autograph party Saturday, February 28) to bring in, money-wise. They said they'd already had offers of over $300 (which is what I meant by saying that you need bread to buy Ellison). Amazing, considering that buying the stories does not include reprint rights (the stories have already been sold for publication) and that you could purchase a copy of them for $10 like I did. Talk about TREK people spending their money wildly ...

While I stood around absorbing his charisma, Harlan received a phone call from the guy who's running the June 76 Chicago STAR TREK extravaganza [1]. He offered not only an exorbitant $3000 fee for Harlan to appear there, but also almost $1000 more to cover his air fare for a previously planned trip to England after the con (since attending the con will cause Harlan to miss his less expensive chartered flight there).

"How Much is That ..." I'd like to mention a bookstore in New York City called The Science Fiction Shop. You could describe it exactly the way Paula described A Change of Hobbit — so it's not a complete rarity. And I can walk into that store and part with $10 at the drop of a hat. I am a Harlan Ellison fiend; why doesn't he live in New York so he can play his publicity games here? On the other hand, I know I would react with profound ambivalence to the prospect of meeting him (again) in person. I spoke to him briefly at what's-her-name-from-Chicago's-New-York-con, and I still curse inwardly every time I remember how doltishly (I think) I behaved. The scintillating things we find to say in our minds never come out that way. About recordings of Harlan reading his stories; I heard him read "Seeing" at the con and "Shatterday" at the Foundation Church, and I most assuredly agree that Harlan is brilliant when he reads his own works ... [2]