A Change of Hobbit

A Change of Hobbit was a bookstore in San Francisco, California from 1972 to 1991. It was one of the first science fiction, fantasy and horror bookstores established, and was a significant part of these fandoms generally, and in Southern California particularly. 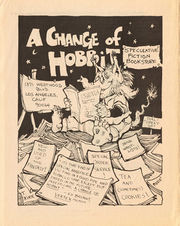 There was also a "Change of Hobbit" in Los Angeles. Years of operation is unknown.

"A Change of Hobbit" bookstore hosted numerous events, including, famously, Harlan Ellison in its front window, writing a story in public view, over the course of a week.[1]

The store was also a main stop on book tours for such authors as Anne Rice and Ray Bradbury.

[A fan's 1976 recollection]: Quoth the Man: "I am not Paula Smith." This in response to my showing him the letter column in WS14. Harlan also wished me to relay the following corrections to Sharon Ferraro's letter; (1) he is 5'5" and not 5'4", and (2) his eyes are blue and not brown. As for not being Paula Smith, well, I wouldn't argue with him to his face but I've never seen the two of them together so I still have my doubts.

He typed a bit more on his latest story ("Mom"— about a young Jewish man haunted by the ghost of his Portnoyish mother— very amusing) and I asked the folks working at the shop what they expected Harlan's originals of the stories (to be auctioned off at an autograph party Saturday, February 28) to bring in, money-wise. They said they'd already had offers of over $300 (which is what I meant by saying .that you need bread to buy Ellison). Amazing, considering that buying the stories does not include reprint rights (the stories have already been sold for publication) and that you could purchase a copy of them for $10 like I did. Talk about TREK people spending their money wildly ...

While I stood around absorbing his charisma, Harlan received a phone call from the guy who's running the June 76 Chicago STAR TREK extravaganza.[2] He offered not only an exorbitant $3000 fee for Harlan to appear there, but also almost $1000 more to cover his air fare for a previously planned trip to England after the con (since attending the con will cause Harlan to miss his less expensive chartered flight there).

I spent most of my childhood hunkered down on a footstool reading SF in A Change of Hobbit since I didn't have any spending money...and I'd just once again ditched my dance class next door. haha. Poor mom. She really wanted me to be graceful.

Instead, I snuck into "the hobbit shop," as I called it, and watched Ray Bradbury sitting at a typewriter in the window. I got handed free xeroxed copies of short stories by famous sci fi authors in draft stages (I still have one by Larry Niven) or zines... I read used books w/o paying a penny, basically using the shop as my personal library, and not a peep out of the staff about kicking me out.

A Change of Hobbit had a lacquered sting ray on the wall that looked like an alien, and in fact, a sign below it said, "From Area 51." It really did look like an alien, but even though I was totally wee when I first saw it, I kind of figured if someone had captured a real alien, it wouldn't be hanging on the wall in a book store.

Even such an incredible book store.[4]

When I was 11 years old, I met Harlan Ellison at the Change of Hobbit bookstore in Los Angeles. He was doing a “window writing” session like the authors did there sometimes (I’d met Ray Bradbury the same way. He was just typing in the storefront window like a display!) but during his breaks Harlan would hang out by the cash register, talk to Sherry Gottlieb (the owner) and sign books.

CoH was really nice about letting people sit in the stacks and just read, so I showed up for the event and then hung out in the corner all day until there weren’t as many people around.

I had my tattered copy of Deathbird Stories I’d read a million times, and I’d bought a new copy of Strange Wine for my friend, Tana, also a fan. I very shyly approached Mr. Ellison and asked him to sign.

“Who should I make it out to?”

“Frogchild,” I told him without thinking.

“Yes! We call each other that.”

“Well…” He reads aloud as he signs, “Dear Tana, this asshole told me to sign this to ‘Frogchild,’ but I told her to fuck off. Sincerely, Harlan Ellison.” He scribbles his signature and then hands me the book. “You want me to sign that one, too?” He’s smirking like a demon.

“Yes, please.” I hand him my ragged copy of Deathbird Stories, but at that point I’m too overwhelmed to ask him for my name, and he just signs his own.

It’s weeks before I get up the cojones to give Tana her copy of Strange Wine, but she’s utterly delighted. Maybe because she’s already achieved the exalted age of thirteen and, in her maturity, recognizes it for the honor it is.

Being personally cussed out by Harlan Ellison is no small thing.