Ellison Wonderland: A View from Trekland

Ellison Wonderland: A View from Trekland is a 1974 essay by Sharon Ferraro. 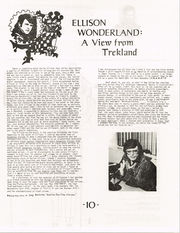 first page of the essay in "Menagerie" 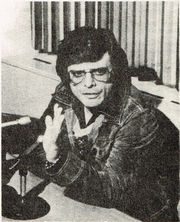 detail from first page of the essay, an uncredited photo

It was printed in Menagerie #3. 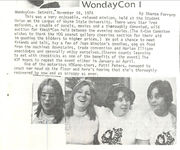 Fans at "WondayCon" #1 wearing t-shirts with the illo of Harlan Ellison that was used for this essay.

The illo used for this essay appears to be by Sara, and was used for t-shirts that some fans wore to WondayCon in November 1974.

The topic was Harlan Ellison.

There is something about Harlan Ellison that defies description -- a quality of PRESENCE in both his writing and his personality. Most people are effected [sic] by Ellison in one of two ways; they either love the man and his works or, just as vehemently hate him. There is very little middle ground. But despite the side chosen, the initial reaction is one of involvement and what I call "The Ellison-on-the-Brain" phenomenon.

Speaking for myself, I first encountered Harlan Ellison in "City on the Edge of Forever", though at the time I had absolutely no idea who or what he was. Earlier I had read his short story "The Prowler in the City on the Edge of the World" in Dangerous Visions #1 , which I bought because Isaac Asimovs name was on the cover. I don't count these two exposures to the man as at the time I was pretty out of it. But last October, (To get back to the Ellison-on-the-Brain) I had the good fortune to literally stumble across him at Star-CON . He was in the middle of a group consisting of Walter Koenig, David Gerrold and Norman Spinrad. Earlier in the day, I had had chances to be near and speak a few words to the other three, but with Ellison in the middle of them there was an entirely different aura about them. This is not to denigrate the other three or to polish Ellison's charisma even further; but undeniably there was a PRESENCE, a magnetism of personality that was not imaginary. I quote Dr. Isaac Asimov on this phenomenon, "You can even have your back to him and be unaware that he is within five states of where you are standing, but from the way all the young ladies in the place are shaking, you know at once that that must be Harlan behind you somewhere, and he may not even be doing anything." Young ladies, you say, just another personality, 'the groupies syndrome'. No, I repeat, NO. At the same con, I had numerous opportunities to encounter the other named STARS and the feeling was different both in the crowd and in the people themselves.

The Ellison-on-the-Brain is the reaction following the first immersion in the works of Ellison.

Though I still regard Ellison as my favorite SF writer (Running second is James Tiptree, Jr.) I have shut up to a great extent. I no longer expound at length on the man or his works. (I do however hope to get him as a guest for KWeST-Con '74 next November. [1]

What about it, you ask, so what if the fellow has charisma and this writer digs his technique immensely? (Watch it scuttlefish!) After all he is human, right? Very much so. He has numerous and on occasion annoying idiosyncracies. He abhors electric typewriters, tends to make scenes in restaurants, and admits to fearing only one thing getting things in his eyes. He has huge amounts of nervous energy, is uninhibited in the use of 'cuss words' in their proper places, strong in his commitments and beliefs and, I understand, occasionally hard to get along with. He was a participant during the anti-war demonstrations in Century City a few years back (Was it really 5 years - 1968?) and was arrested for hitting a cop, he marched in 1970 for the California Unified Farm Workers, (along with Leonard Nimoy, by the way.), worked for Senator John Tunney's election in 1972 and predicted in 1970 that the years ahead, under Nixon, would evolve the US into the greatest period of government surveillance seen since the McCarthy era. (OK, What if Watergate had not been uncovered and the former Attorney General had gone ahead with his plans to have a dossier on every American?) (When I reached that prediction in 'Glass Teat' I dropped the' book in the bathtub, for which the loaner of the volume has not yet forgiven me.)

What I am trying to say I suppose, is that for anyone who likes good writing, SF, ST or otherwise, an Ellison work is a great investment. If any of you reading this 'zine have read or do in the future read Ellison I'd like to hear from you. I'm hiding it better now, but I've still got Ellison-on-the-Brain.