Alkarin Warlord is a gen 122-page novel by Fern Marder and Carol Walske. It takes place in the Nu Ormenel (Klingon) universe. It includes music, art, poetry and fiction. 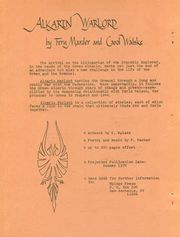 flyer printed in Threshold and Probe #12 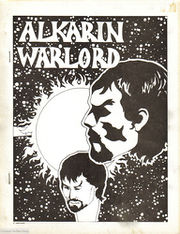 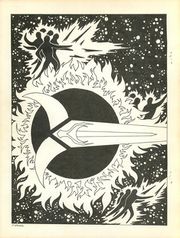 From ad in Probe 12: "Alkarin Warlord carries the Ormenel through a long and costly war with the Federation. More importantly, it follows the Ormen Alkarin through years of change and growth -- exemplified by his deepening relationship with Tavia Nelson, the prisoner he comes to respect and love. Alkarin Warlord is a collection of stories, each of which forms a link in the chain that ultimately binds Kor and Tavia together."

The zine is "dedicated to: Winston A. Howlett, friend of rare sensitivity and per ception, for his steadfast loyalty, selflessness, and good humor AND Kyrol Waters, kiling of the Kilingarlan, for sharing with us her courage, hope, and trust."

Note: "A different arrangement of the music for "Nu Evriand Fevesan Getheni" appeared in The Universes in Science Fiction, Volume 2."

Believe it or not, this publication was first conceived by Ye Editor.

You see, I wanted to publish two PROBE Specials in 1978 and knew that I would only find time to produce one of them myself. So, in the late summer of 1977, I approached Carol and Fern with the brilliant idea of a major Nu Ormenel project for PROBE. They would select the type of novel or story collection they would want to do (within the bounds of PROBE'S editorial tastes) and I would be able to just sit back and do a little editing and publishing, since the dear ladies had already set up an efficient system of writing, proof reading, laying out, typing, lettering and illustrating almost all their stories. Such a project would be—for me--a piece of cake. Ha!

The first thing that happened after the initial agreement was that the daughters of the Ormenel wanted the project to be a Mpingo Press Special, and not a PROBE Special. Secondly, they wanted the photo-offset operation to be on an economic par with the less expensive mimeograph operation called THRESHOLD, which they were writing and illustrating for Poison Pen Press at the time. I soon agreed with these alterations of my dream because they proved to be based upon sound reasoning. But little did I know how much "fun" being editor/publisher of a Nu Ormenel project would bring me…

We are sitting in our hotel room at August Party. This morning someone heard our names and said, "Oh, I know you. You write that Klingon stuff. I've read some of it." Didn't say what she thought of it, of course. So it goes…

This has been a crazy year. Threshold came out in January. Between Threshold and Alkarin Warlord, we did four short stones, poetry, artwork, music and various other things. After Warlord, we have one more story commitment, and then we can rest a little while—maybe a week if we're lucky. This year we also started the reprint service. Its greatest reward for us has been the opportunity to correspond with Nu Ormenelreaders. The questions asked of us are many and varied, simple and complex. Possibly the most common question raised is "Why Klingons?" Nu Ormenel really isn't about "Klingons." It's about people—social conflicts, personal values, the growth and change of one person or an entire society. The setting—the planet, the culture, the kilingau—is original to Nu Ormenel, the concepts are universal. The above is particularly true for Warlord. For those who have read Threshold, Alkarin Warlord is a direct sequel. For those who haven't, Warlord is set in Ormenel history shortly after the revolution that made Commander Kor Kothir into the Ormen Kor Alkarin. The Organian sun has gone supernova; both the Federation and the Ormenel have been testing the limits of what was the Organian peace treaty The time has come for decisive action—war. But Alkarin Warlord isn't really a war story at all. It deals with a deepening relationship between two people brought together, in conflict and love, by that war. The nine stories, which should be read in order, span a period of ten years of history and growth.

The format of Alkarin Warlord is unique. To conserve space (this would've been a165-page zine),a new typing style was devised. This helped cut printing costs and kept the price of the zine down. The four pieces of music have been printed on foldout sheets for easy use. Open the foldout, close th ezine (front or back as necessary). The music has been simplified for everyone's convenience.