A flower crown is an ephemeral head dress made from flowers. Flower crowns are associated with femininity and childhood in art. For examples, see "Crown of Flowers" by Adolphe-William-Adolphe Bouguereau (1884) and "Ophelia" by John Waterhouse (1910). Naturally, fan artists enjoy drawing or photoshopping flower crowns on male characters. 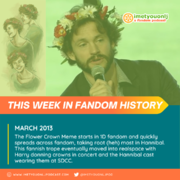 I Met You On LJ's "This Week In Fandom History" credits Harry Styles/One Direction fandom for the 2013 meme, which quickly spread to Hannibal fandom.

Flower crowns have always been around, but in 2013, they became a widespread meme on Tumblr. According to Know Your Meme, this meme started in One Direction fandom in March 2013, was inspired by a 2011 tweet by Harry Styles ("I wish I was a punk rocker with flowers in my hair.")[1], and spread to other fandoms by May.[2] Know Your Meme appears to be right about One Direction, but wrong about the tweet.

The earliest posts in the tags flower harry, flower child harry, and flower crown harry date to March 21, 2013, but Tumblr user hearteyesharry's post flower child harry is the best harry: a masterpost identifies fanart posted by mainlyapes on or before March 17 as the source of the meme.[3] Tumblr user lourehs claims to have the honor of creating the first Flower Crown Harry manips; her post was dated March 18, only a day after the art was probably posted.[4] Fanfic inspired by the meme was being posted to the AO3 by March 22.[5]

Although Harry Styles' tweet is incorporated into many flower crown Tumblr posts, there is a two-year gap between the tweet and the start of the meme, leaving open the question "why now?" Tumblr user actualhannibal points to Lana Del Rey and general fashion trends in 2013 as the direct inspiration for the meme[6]. Although actualhannibal was in a different fandom and did not appear to be aware of the meme's origin in 1D, a look at the flower crown Tumblr tag circa March 2013 confirms that Tumblr users were already interested in flower crowns at that time. In fact, there were non-fannish examples of flower crowns photoshopped onto women circulating as early as February 22.[7]

The tweet is actually the title of a 2005 song, I Wish I Was a Punk Rocker (With Flowers in My Hair), though it is not clear that memers recognized the reference. The song is about nostalgia for both the 60s hippie and 70s punk eras. A few months before the flower crown meme started, 1D fandom had experienced a punk edit meme, and edits pairing Flower Crown Harry with Punk Louis appeared very quickly after the new meme started.[8] Combining the two memes may have happened because punk edits were still in circulation, but it is equally likely that the song title itself, quoted frequently with flower crown posts, encouraged the combination. The Punk/Flower Child link does not appear to have carried over to other fandoms.

Flower crowns became especially popular in the nascent Hannibal fandom, so much so that the showrunners noticed. In July Hugh Dancy wore a flower crown during a San Diego Comic Con panel. In September, NBC ran a contest for fans to submit photos of themselves wearing (real or photoshopped) flower crowns.[9] The first Hannibal flower crown manip to be posted is thought to be i hate everything (except for puppies, I love puppies)[10] by ammapreakers (hettiennes) posted on April 28, 2013.[6] Although the start of the show coinciding with the meme may be the proximate cause of flower crowns taking root in Hannibal, cleolinda speculated that the meme "caught on as the fandom's way of balancing the darkness and tragedy and gore by being silly and light-hearted and imagining Will Graham Having Nice Days".[11] (Oddly, flower crowns may have caught on in 1D for the opposite reason--Flower Crown Harry was consistent with existing fanon and quickly became canon, to the surprise of nobody.)

Although most tumblr memes last for a few days (or a day) and then sink into obscurity, the flower crown meme lasted months and may still be generating new works as of 2015[12]. It inspired fans to give flower crowns to the subjects of the manips that had been posted, and in turn the footage of a Harry Styles or Gerard Way[13] wearing their flower crowns led to other fans creating gifs and art of these moments. Almost any fanart posted on tumblr (or deviantart[14]) since 2013 that features someone wearing a flower crown can be attributed to the influence of this meme.