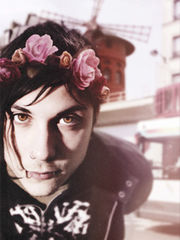 demon edit of Frank by ghostalienpunkers (2014)

Frank Iero is best known as the rhythm guitarist of American alternative rock band My Chemical Romance, one of the bands that constitute the Bandom canon. He fronted post-hardcore punk band Leathermouth (often written as LeATHERMØUTH), providing lyrics and lead vocals, as a side project. His first post-MCR project was frnkiero and the cellabration (Stomachaches album released August 25, 2014); he renamed his band Frank Iero and the Patience for the second album (Parachutes, 2016). He has also released an album with James Dewees as Death Spells.

Born on October 31, 1981 in New Jersey, Frank is well known for his love of his home state, and even has a tattoo of the initials "NJ" on the inside of his lower lip. He frequently suffered from bronchitis as a child, and his generally poor immune system has often prevented him from playing shows. He is also lactose intolerant and allergic to many foods.

His parents divorced when he was a child, and he was brought up by his mother, although he still had contact with his father. Both Frank's father and grandfather were musicians, and were big influences on him. His father encouraged him to play drums, but Frank instead chose to take up the guitar.

He was involved in many different punk bands from the age of 11 onwards. His first major band was Pencey Prep, who were signed to Eyeball Records and released one album, Heartbreak In Stereo, before disbanding. Frank attended Rutgers University on a scholarship, majoring in Psychology, but dropped out to join My Chemical Romance. He has said in interviews that MCR were one of his favourite bands, and being asked to join them was a huge honour for him.

He married his long-time girlfriend Jamia Nestor in 2007, with whom he co-founded the independent record label Skeleton Crew. Architects, sometimes considered another member of Bandom, were first signed to this label.

Frank and Jamia have three children.

Tattoos and other trademarks

Frank Iero has many tattoos [1] including logos for the bands Black Flag and The Misfits, symbols of his love for his home state, New Jersey, a pumpkin relating to his Halloween birthday, a matching 'revenge' tattoo with James Dewees and others by acclaimed tattoo artist Kat Von D: a Frankenstein's monster and portraits of his grandmothers and grandfather, all of which were featured in Von D's book High Voltage Tattoo and the latter of which was done on an episode of her reality show LA Ink in which Iero featured. In the aforementioned book, Von D states that she was present at Iero's wedding indicating that the two have remained close friends.

During the Three Cheers for Sweet Revenge era, he was known for wearing fingerless gloves decorated with skeleton hands and makeup with black crosses over his eyes. He often played a white Gibson Les Paul guitar named Pansy. He's also collaborated with Epiphone to produce the Wilshire Phant-O-Matic, his own custom guitar.

The most popular AO3 ship tags involving Frank are (non-exclusive numbers as of Sept 12, 2014):

Digital fanart by Hootsweets of a sick Frank and concerned Gerard

Frank is often involved in hurt/comfort stories due to his under-performing immune system and numerous canon injuries. Presumably the most common Frank trope, either as the focus of the story, or as a plot detail. For example:

"I know!" Brian said gleefully, and Frank grabbed him and hugged the shit out of him, ignoring it when Brian said something unimportant about not being able to breathe.

"I love you," Frank said fervently. "I love you so fucking much."

Brian laughed and patted Frank's shoulders, before pushing him back and saying sternly, "Don't take this as an invitation to get sick, though, okay?"

Frank is often characterized as excitable, hyperactive and overly friendly, with little regard to personal space.

Related to the previous, Frank is sometimes depicted as a (more or less lovable) asshole. For example:

Frank takes advantage of any opportunity to dress in a costume that shows how little he cares about you
Even being interviewed, Frank has no problem looking unimpressed
Other times, Frank uses cancer sticks and asshole!eyes to show he's not only bored with you, but GRUMPY ABOUT IT
IS IT TIME TO GO HOME YET

There were so many occurrences of sweaty Frank rubbing himself all over his bandmates during the 2007 Projekt Revolution tour that it gave birth to a slew of sex pollen and heat fics.[9] For example:

Everyone on the tour jokes about it: oh, Frank's in heat. He laughs along, and then drags Jamia into the back after shows. Then Jamia has to go back to Jersey for a family emergency, and it's not quite so funny anymore. Playing makes it worse. On stage the third night, Frank bites Gerard, licks Mikey, rubs up against Ray, and climbs on Bob's kit twice, despite the riser.

He is occasionally described as being very neat and hygiene-conscious, especially in contrast to the Way brothers. In 2009 someone asked bandrandom_ref if this trope was pure fanon; it appears to be extrapolation based on a few suggestive comments during interviews and Life on the Murder Scene.[10]

He is often depicted as an animal lover, who wants or owns many dogs. (Either started or encouraged by Bob Bryar's October 2008 myspace update: "frank has 19 dogs now.")[11] For example:

Due to the resemblance of upper case "i" and lowercase "l", Frank's surname is often misspelled "Lero".[16] This became an in-joke within the band (Frank is credited as Lero at the end of the official "I'm Not Okay" video, Frank's twitter handle - set up by Gerard - was misspelled for a long time)[citation needed]. The fandom ran with it, with Frank Lero popping up in meta and fanworks as Frank's (evil) twin or doppelganger.