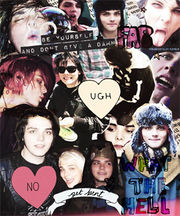 Gerard Way is best known as the creator, lyricist and lead vocalist of American alternative rock band My Chemical Romance, one of the core three bands constituting the Bandom canon. He is also known as the creator and writer of acclaimed comic book series The Umbrella Academy.

The most popular AO3 ship tags involving Gerard are (non-exclusive numbers as of Apr 7, 2017):

Several characterization tropes might be found within the same story.

Gerard is often shown as introverted (living in his parents' basement and rarely leaving it), and/or totally immersed in his creative work to the point where he forgets to eat (or sleep) and disregards the time of day. Many stories also include him lacking in personal hygiene and generally being untidy. Examples:

Often related to the previous trope.

In the popular Highschool AU genre, especially as inspired by the "I'm Not Okay" music video, Gerard is commonly a "loner", a victim of bullying, and/or the outcast "goth kid" if he is still in school. When Mikey Way is the central focus of these stories, Gerard might also be depicted as the mysterious older brother who goes/went to college. Examples:

“You need to learn some fucking manners, freak,” another guy sneered, and Antlers McBigot grunted in agreement, lip still curled in outrage over the insult to his vehicle. He reached out and shoved Gerard, a solid painful blow that left him staggering back on his heels and sent his coffee over his shoes in a wave of wasted caffeine. Laughter echoed through the surrounding crowd.

Photographic evidence and Gerard's own statements show that he was overweight as a teenager. He also visibly lost weight between Revenge!Era and The Black Parade tour/videos. (Post!MCR appearances have also shown various changes in weight, which fans have remarked upon.) Thus, especially in Basement!Gerard fanfic, as well as fic set during the Van Days, he is often described as having baby fat or just being pudgy or overweight. Slash fic with seme Frank and uke Gerard often contains this trope. In 2007, valerie_z had something to say about this trend:

GERARD IS NOT FAT AND IF YOU KEEP CALLING HIM FAT IN YOUR FANFIC WE ARE GOING TO THROW DOWN BITCH. Seriously, at least one out of every ten MCR RPS fics I read mentions Gerard being fat, or chubby, or having a hang-up about being naked. But he is so pretty! He is prettier than you, and yet you call him fat. Just because he doesn't spend half his day taking pictures of his own crotch tattoo like some people doesn't mean he's fat.[9]

Also related to Basement!Gerard. He and his brother Mikey are often depicted as fans of comics, horror, fantasy and sci-fi films, roleplaying and of course, music. Examples:

“You were looking for a comics store at three a.m.?” Frank asks doubtfully, taking the opportunity to scoot forward in Gerard’s lap.

Gerard gestures in a circle with his soda glass. “Yeah, I know, but I’d just finished the last issue and I thought…” He stops, the tips of his ears turning pink where they stick out from his greasy hair, and rubs the back of his neck bashfully. “I know, it’s pretty lame, right?”

“It’s adorable,” Frank tells him, and he actually means it. He’s not sure what’s more endearing; the fact that this guy isn’t bothering to concoct a story to cover his lame-ass reason for coming to a strip club, or the fact that the real story is lamer than anything anyone else could have possibly come up with or admitted to.

Many stories focus on Gerard's alcohol and drug addiction and his struggle with depression. These are usually angst, or whump.

By the time he turns down Frank's street, Gerard's mumbling to himself like a crazy person. "One step at a time," he says, watching his feet striking out along the pavement, "this is good, you're taking a walk, you're walking someplace, you're going somewhere. You'll get there, and there will be food, and they know. They know. They'll let you hide in the tub, you can hide in the bathtub."

When not written as a singer in MCR, he is most commonly made to be a (struggling or successful) artist: a painter or comic book writer.

Gerard is shown to be passionate and often outspoken about art and social issues (especially gender stereotyping)[10]. He is the most likely member of the band to be written as very (academically) knowledgeable of these topics.

"I love that you do this," he said, not letting himself think about it. "I love that it's something you do. I think that it makes you seem like, I don't know -" He paused, thinking about it. "More of a man, not less, like the assholes who don't get it say."

It’s not whether we personally feel any desire to do it, it’s that we’re saying it’s okay, we’re accepting, and we’re giving them proof that it’s not just talk, we really are okay with it. Kids need that.” Gerard breaks off in the middle of his speech, looking over to smile warmly at Spencer. “Thanks.”

Often related to the previous trope.

On top of enjoying dramatic stage makeup and playing with feather boas on stage, Gerard has been quoted in interviews talking about experimenting with crossdressing and putting on make-up in the privacy of his own basement[11]. It's thus unsurprising that Gerard is often depicted as a man experimenting with masculinity/femininity, as defying gender norms, or as a woman, for example:

Now, look, I'm not saying that Gerard's genderqueer because speculating about somebody else's sexuality and/or gender identity is kind of an asshole thing to do. I'm just saying that he's what you might call girl pretty. And kind of delicate in his mannerisms. Which I find really fucking hot. So I like the idea that he could be genderqueer. I mean, come on, look at him!

In 2014, Gerard made several statements about gender on Twitter and in a Reddit AMA[12] that made fandom very happy, though there was some disagreement among fans as to what this actually meant about his gender identity.[13] He also made positive comments on twitter in April 2015 about fannish interpretations of his Killjoys character Party Poison as nonbinary and said, "I think I was starting to experiment more with expressing more femininity with the character, but not sure it made it all the way."[14] These comments may have been the inspiration for some more recent fanfic depicting Gerard as trans/nonbinary[15], although it also fits within a larger panfandom 2010s trend in exploring gender identity. (The earliest fanwork in the Trans Gerard Way tag on AO3 was posted in June 2015.)

Gerard Way's solo music project post-MCR has inspired some fans to make art, gifs, and a tiny amount of fic. His album Hesitant Alien was released in 2014, and he went on tour with his backing band The Hormones. Concert footage from the tours has been made into gifs, promotional and other photos of Gerard have been used as photo references, and the album itself, along with the character of Lola (a pink fuzzy alien) have also generated fanworks.