The Black Parade is the third and most commercially successful album by the American rock band My Chemical Romance. It was released shortly before the rise of bandslash fandom on LiveJournal in early 2007, though MCR already had its own active RPF fandom following the release of the second album.

The Black Parade is a concept album about mortality, featuring several characters including a Patient dying of cancer and "Mother War". The album art and related music videos, especially "Welcome to the Black Parade," have a black-and-white aesthetic. Marketing added mystique to the album during the lead-up to the album's release: before the title was announced, there were mysterious references to what fans thought was a new band called "The Black Parade"[1] and MCR actually performed as "The Black Parade" and not as themselves[2].

While the circumstances surrounding the creation of the album and the videos were incorporated into RPF (see Paramour Fic), the album itself also inspired fannish creativity, especially fanart, fancrafts, and costumes[3]. Some fanfic was also created, though not to the same extent as that inspired by Danger Days.[4]

In early 2008, baffled fans on livejournal were discussing why there were so few Black Parade AU fanfics around. Posting a Supernatural/Black Parade crossover in January, Ethrosdemon commented, "The other day I was reading a comment by (I think) Pouncer about the lack of fic set in The Black Parade, um, universe? and I thought "YEAH!" and then that was that."[5] In February chebonne posted a plot bunny to wolfshirts:

I was watching both Welcome to the Black Parade and Famous Last Words earlier and I was wondering, why aren’t there more Black Parade AUs? And I don’t mean, like, the Black Parade is an actual band that MCR meets etc., etc., I mean the actual world, the Metropolis/Jeunet world that the Patient lands in after death.[6]

The future author of The Fall and Rise of The Black Parade commented on the post to say, "If I don't talk myself out of it in the next few days, I may be writing a Black Parade AU for bandombigbang."[7]

Despite the popularity of The Fall and Rise of The Black Parade, it apparently didn't usher in a new era of plenty. As of 2016 some fans were still wondering:

I really think it's odd that TBP has had a relatively small impact on the fandom, compared to their other albums. Especially since it was probably their biggest album. People make edits/GIFs of the shows and music videos, but I don’t see the aesthetic anywhere, and I haven’t seen a TBP fic in years.[8]

Welcome to the Black Parade

The song "Welcome to the Black Parade," which is fifth on the album and the first released as a single, is very popular and has also become a meme in its own right.

The intro lyrics generated the meme When I Was A Young Boy. 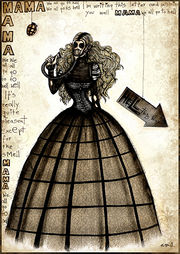