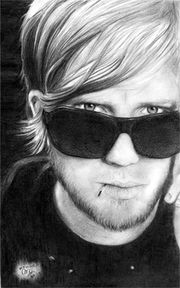 Bob Bryar is best known as the former drummer of American alternative rock band My Chemical Romance, one of the core three bands constituting Bandom canon. He joined the band in 2004, having been introduced by their then manager Brian Schechter, who knew him in his capacity as a sound technician for peripheral bandom band The Used, which Schechter also managed.

He parted ways with the band in 2010, before touring for fourth album Danger Days began, under still-unknown circumstances. His relationship with the band subsequent to his departure has been fraught. He has since returned to relative anonymity.

Despite his departure and ambiguous relationship with the band, Bob continues to feature in fanworks.

As of May 30th, 2015, there were 1738 works tagged 'Bob Bryar' on AO3.[1] Bob pairings often appear as side pairings in fics with more popular main pairings.

Bob ships in order of popularity, according to AO3 pairing tag use:

In fanworks set in the Killjoys verse, which was released after his departure from the band, Bob's absence is sometimes explained by his death or capture.