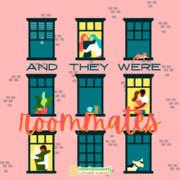 I Met You On LJ featured the Roommate AU with the Vine Meme text "And they were roommates" for Fic Trope Friday.

Roommates AU is a fanfic trope fairly common in various fandoms, where the stories are in a universe where a group of characters or at least two characters are roommates in an apartment or a house. This was probably influenced by the television shows Friends and New Girl. It's often mixed with another alternate universe tropes such as Modern AU and College AU. Roommates AU is often used as a way to get a pairing together.

Oh my God, they were roommates is a meme inspired by a popular 2014 Vine in which a woman walking by the camera is saying into her cell phone, "...and they were roommates!" The man holding the camera then says, sotto voce, "Oh my god, they were roommates!"[1][2] Know Your Meme has a writeup here. This became a popular tumblr/meme format for spin-offs such as vampires in the same coffin (oh my god they were tombmates), etc. It is possible that the spread of the meme in fandom contributed to the popularity of Roommate AUs. A title search on AO3 shows that references to the meme have become popular fic titles.

This trope was especially popular in 2014-2015 One Direction and Larry Stylinson fandom, because Harry Styles and Louis Tomlinson were indeed roommates in 2012-2013.

Various combinations of the 1D boys often live together in fics: