Shiro/Keith is a slash pairing of Takashi Shirogane and Keith Kogane from Voltron: Legendary Defender.

Shoulder touches are a common trope taken from canon

Shiro and Keith show a caring dynamic throughout the show's ongoing run that hints at a deep friendship based on mutual understanding and respect, developed at some point pre-canon. Keith seems much more comfortable and open with Shiro than he usually does with others, to the point of a casual physical intimacy that he doesn't typically show with other characters including shoulder touches, clasped hands, hugs and simply being close to one another. The very first episode has Keith's first appearance being a self-appointed mission to save Shiro.

The focus on Shiro and Keith's relationship increases dramatically in the second season. The Blade of Marmora is generally viewed as one of the episodes that supports the ship the most. In this episode, Keith learns about his Galra heritage by undergoing a physical and psychological test that pushes him to his limits. Shiro watches while Keith fights for his life in an arena-style battle. Kolivan, leader of the Blade of Marmora, a group of rebel Galra, tells Shiro that Keith is wearing a special suit which creates a mind-scape that shows Keith his "greatest hopes and fears." The resulting scene showed that Keith's greatest fear was doing or saying anything to make Shiro walk away from him. The fear is groundless, however, as Shiro risks the team's alliance with the Blade in order to rush in and rescue Keith.

With Shiro gone at the beginning of the third season, Keith spends most of the first episode distraught over his loss, and it is implied that Keith has spent quite some time searching the wreckage of the final battle with Zarkon looking for Shiro. Mid-way through season three, Keith is again the one who finds and rescues him, who is on the brink of death after escaping from Galra imprisonment a second time. Keith is also the only one shown aiding a recuperating Shiro in a scene fans have nicknamed "The Bedroom Scene."

Season 6's episode The Black Paladins is a huge fan favorite, with Keith fighting a brainwashed Shiro and going so far as to tell him he loves him. This briefly breaks through Shiro's madness, but to little avail. We also learn that the real Shiro died in season 2, in the final battle, and the Shiro whom Keith rescued in the following season was a clone. The final episode of the season had Shiro coming back to life as Allura merged his preserved soul with the clone body. The following season's first episode delves into Keith and Shiro's past together, showing just why Keith is so devoted to him.

Shiro and Keith hug in Belly of the Weblum

The final season of the show disappointed many Sheith shippers due to their lack of on-screen interaction, including having them split up when in the past they'd have gone somewhere together. Some fans blamed executive meddling for "ruining" the pairing's dynamic due to fan complaints or fear of inviting controversy, while others wondered if the new writing team simply didn't have a handle on the characters' previously established bonds. However, other shippers will point out that the moment the Atlas merged with Voltron was the moment Shiro realized Keith was in danger during the final showdown with Honerva. Many believe the clumsy writing and lack of interaction have no bearing on Keith and Shiro's bond.

Shiro's marriage to communications officer Curtis in the epilogue also generated much disappointment and heartbreak in fans who at most hoped for an open ending for their pairing. Some fans choose to ignore the epilogue, or treat it as just one of many realities as the show has canon multiple universes. Other Sheith fans eventually warmed to Shiro/Curtis, choosing to multi-ship rather than pick one over the other.

The pairing has a dedicated anti fandom who consider it (and any relationship between Shiro and a paladin) pedophilia due to previously unclear information about ages. The handbook, which is not yet considered by the creators to be canon, states that Keith is 18. Still, anti-shippers try to claim that the ship is either pedophilia or that the characters are brothers (to make the pairing incest) despite a lack of canonical basis, and racist undertones implying that there cannot be two Asian characters without them being related somehow.[1] Coincidentally or not, the ship also happens to get in the way of the juggernaut ship. Nevertheless, it continues to be a fairly popular pairing with an enthusiastic fandom.

In early 2018, as a response to anti-shippers' continued harassment of voice actor Josh Keaton and his family, a campaign in the VLD fandom led by prominent Tumblr users to disaffiliate completely (blocking and not reblogging any content, ship related or not) from any anti-run fandom blogs has helped soothe inflammatory anti-ship rhetoric.

Shiro loves you baby #he is looking at keith[2]

Members of the VLD staff, including directors and voice actors, have shown support for the ship. Of course, fandom reacts excitedly each time staff shows support. 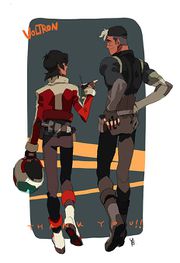 Shiro and Keith from Kim Il Kwang on Facebook

tl;dr: an episodic director of V:LD posted a picture of shiro smiling with the caption ‘shiro loves you baby’ and tagged it as '#he is looking at keith'

Josh Keaton on AfterBuzz TV in the VLD Season 2 episodes 7&8 Review & After Show:

[Keith] latches onto Shiro at times because Shiro’s sort of the only thing that can really calm him down and keep him in check. [4]

JDS has also said "[Keith] and Shiro have the closest relationship so there was that kinship there." and "Shiro, he loves Keith" at ECCC 2018.

In a brief flashback during S4E2, you can see Shiro and Keith together at the Kerberos launch site. When asked about the Easter egg in an interview, Executive Producer Lauren Montgomery giggled and responded

Shiro and Keith by barlee

Kihyun Ryu drew "fanart" depicting Keith blushing while clutching onto Shiro from behind. This spawned many fanarts of Keith hugging Shiro and staff have been known to sign and love Sheith merch they see at conventions. The book staff have made several posts on twitter regarding the Sheith-y content of the Blade of Marmora book[7]

Some Sheith fans are also poly shippers, open to adding a third partner to the relationship for a new kind of dynamic. Usually it's another man due to Shiro being an mlm, but sometimes it will be a woman. Popular Sheith threesomes include:

A notable plot device for Shiro/Keith/Curtis involves Curtis instantly bonding with Kosmo, Keith's wolf, which helps Keith and Curtis become friends and get to know one another better.