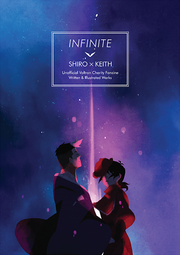 Infinite, also known as the Sheith Charity Zine, is a zine featuring fanwork of the Takashi Shirogane/Keith Kogane pairing.

It features the works of 43 artists and 15 writers in 96 full colour pages. Postcards and stickers were also included as incentives.

The proceeds went towards beyondblue, an Australian charity which focuses on supporting those with mental health issues such as depression and anxiety.

Anti-shippers claimed to have urged the charity in question to refuse the money raised by the project:

I didn't think the Voltron antis could sink any deeper, but now they apparently contacted the charity to which some of the Sheith shippers chose to donate the proceeds from a charity zine they made specifically for that purpose, just to tell them they should--???--refuse the money, I guess? Because it's coming from a bunch of ~pedophiles~

I saw several Sheith artists and writers talking about this on twitter and apparently this wasn't an isolated incident, since there are/were actually several Sheith charity projects, like the Sheith Zine or the "Shiro loves you, baby" patches that maobebe made. I'm sure whoever got those letters simply laughed it off, but jfc, how fucking embarrassing. Imagine being so pressed over people shipping a fictional pairing you don't like that you'd try to stop them from donating to charities dedicated to abused kids (the same ones you're claiming to protect).

"That charity refused your money (and accepted ours in return, by the way)"

I'm calling bullshit on this. If this is about the Sheith Charity Zine, it's not even up for preorders yet (http://sheithzine.tumblr.com/), so how could a charity refuse money that hasn't even been collected yet? And why would they disclose that information to outside people? Not to mention that the idea that a charity would refuse to accept money because of fictional pairing between two cartoon characters is laughable at best.

If this is about some other charity project, like maobebe's "Shiro loves you, baby" patches or those "DISCOURSE" t-shirts and prints (can't remember the name of the person who made those), I haven't seen anyone say that the money they raised was refused.