Hanahaki Disease (花吐き病 (Japanese); 하나하키병 (Korean); 花吐病 (Chinese)) is a fictional disease in which the victim coughs up flower petals when they suffer from one-sided love. It ends when the beloved returns their feelings (romantic love only; strong friendship is not enough), or when the victim dies. It can be cured through surgical removal, but when the infection is removed, the victim's romantic feelings for their love also disappear.

The trope was popularized in East Asian fandoms (Korean, Japanese, Chinese) before it was used by Westerners. In fandom, it appears most frequently in relation to BL pairings.

The Hanahaki Disease trope is not used exclusively within fandom - many people have become intrigued by the concept and created non-fannish artwork, poetry,[1] songs,[2] music videos,[3] documentaries and other creative works based around the concept. However, Hanahaki Disease is particularly popular within fandom due to its potential for angst, hurt/comfort, pining, and general romantic tension.

The Hanahaki Disease trope was popularized with the Japanese shoujo manga,「花吐き乙女」(Hanahaki Otome), or The Girl Who Spit Flowers by Naoko Matsuda (松田奈緒子), which was released in 2009. The symptoms of the disease are summarized to strong pain, having flowers blooming in the heart and lungs, and then throwing them up.

However, among East Asian (Japanese and Korean especially) fans and creators, the concept of flower regurgitation due to unrequited love dates to before Hanahaki Otome's release. Its true origins are currently unknown.

In 2017 the Korean webtoon Spring in the Heart by Bboong was canceled and disqualified as the 2nd Prize winner of Lezhin's 3rd World Comic Contest due to using the Hanahaki disease trope. According to a translated statement from Bboong, "I did not know that the Hanahaki disease was a fictional concept with property rights owned by the original creator." This apparently referred to Hanahaki Otome.[4]

This trope has several variations, and is used in both happy and tragic stories. It often develops over months or even years, beginning with coughing up a few petals and growing in intensity (and pain) until the victim is vomiting entire flowers, by which point the disease has entered its final stages.

Another popular version is when the victim's lungs get filled with the flowers and roots grow in their respiratory system. They choke on their own blood and petals, and die. It is popular due to the angst that comes with character death.

There are also works where the flowers are surgically removed, as are the victim's feelings of love, meaning they can no longer love the person they once loved. Sometimes this also removes their memories of the former beloved, or the victim's ability to ever love again. Often, the one suffering the disease will refuse the surgery, preferring to die rather than losing their feelings.

Many artists and authors tend to use cherry blossoms as the flower of the petals that characters cough up, although it's not uncommon for the flower to be something significant to the characters. Flower symbolism is also popular in western fandom, for example to represent the victim's affections or personality, or that of their loved one.

Few people match this disease with Sporotrichosis and Lovesickness. But these are not the same. Hanahaki disease is a fictional disease, on the other hand, sporotrichosis is a real disease. This is known as rose gardener disease. Lovesickness is a disease recognized by medieval physicians.[5]

There exists another very niche version of Hanahaki disease which changes the concept in ways of how the disease operates, and it's one following a more sexual version of the initial concept. For this, Hanahaki is contractable through sexual intercourse, and manifests around the pubic section of the lower body in the form of flowers. The development of the disease is linked with your level of stress, applicable to the feeling of rejection or unrequited love, and it is possible to treat the disease by cooling said part of the body, although one needs to be careful about it. In the case that the love of the afflicted person is requited, the body heat that is a result from the warm feeling the person gets acts as a way to cure the disease, and a healthily led romantic relationship aids in getting rid of it at last. During that time, the afflicted person will start loosing flowers through their lower body until the body ultimately heals itself. Just like with the initial concept of Hanahaki, this also gets gradually more painful and uncomfortable throughout the stages until death if nothing is done about it. As Hanahaki here works similarly to a parasitic plant, removal is possible through surgical intervention, but also treatment through antibiotics is possible, although it takes a while and has a high chance of the disease returning a few times until one is ultimately rid of it. As love is something created inside the brain, surgical removement of the disease will not impact the afflicted persons ability to love. But due to the placement of this version of Hanahaki, many feel too embarassed to seek out medical help.

"You made flowers grow in my lungs and, although they are beautiful, I cannot breathe." --Unknown[6] 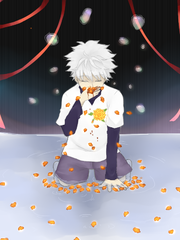 Killua from "Words that Water Flowers" by yuki-carnation