Slow Burn is a popular trope in both fanfic and canons where the characters of the main pairing start off not in a relationship and focuses on the slow development of a romantic or sexual pairing. It is often paired with UST and pining due to the focus on the slow nature of the relationship. Some people consider the term "slow burn" to be synonymous with slow build, but others think that slow burn is specifically about the romance aspect of a fic where slow build is more about the plot.[1] Moonbeam's "Fanfiction Terminology" page gives the following definition for slow burn:

Slow Burn -- refers to stories featuring characters who gradually and naturally fall in love or lust before beginning a romantic or sexual relationship. As the emphasis is on the slow evolution of the relationship rather than a quick conflagration into sudden resolution, such stories may contain a lot of UST and pining until the smoldering passion eventually catches fire.[2]

which seems to indicate that most people believe slow burn to be indicative of romance or the promise of it. That is to say for some fans a longfic focused on the Zutara relationship is a slow burn, but a longfic focused on Zuko's redemption arc is slow build. Slow build could be considered the literary equivalent of edging, as there are people who believe that a slow burn is more about the length of time a viewer or reader is investing in a relationship rather than the length of time it chronologically takes for a couple to get together.[1] In that sense, the amount of time it takes for characters in an Arranged Marriage to actually fall in love qualifies as a slow burn even though the characters are "together" for the entire fic.

Like many fannish terms, there isn't one concrete definition for what is and isn't a slow burn. On Tumblr, the-pen-pot made a text post which asked what the meaning of "slow burn" is and offered the following definition:

For me, it’s a fic in which the romance arc is slow and complicated, with eventual pay off often at the climax (no pun intended) of the story.[3]

Others fans responded to the post with a variety of definitions, but many overall agreed with the definition given by the-pen-pot which may be due to the smaller sample size of respondents. On Reddit, r/Fanfiction had a discussion about how slow is too slow for slow burn, and the wider variety of responses seemed to land on the consensus that nothing could truly be too slow, but a reader's individual taste will vary from person to person.

It's never too slow. One of my favorite fics had them hold hands for the first time at over 300k. It was an experience.

I feel like it's not really a slowburn if it's under 100k, personally. Then it's a regular getting together fic. To me slowburn is more like... I don't know, twenty scenes together with bickering and very slowly falling in love before they even think about each other as date material instead of only scenes that directly advance the romance or plot.[4]

I read a slowburn fic which became one of my favorites. They didn't even kiss until about 600k words in. They didn't talk about the kiss or feelings til about 800k words in IIRC. The fic is currently over one million words and they have still not had "actual sex". It's a fic which I ABSOLUTELY love in the Supernatural fandom and the only destiel slowburn better than that to date is the actual TV show lol.

I'd say it varies by person though - not everyone will want to read that much without some sort of resolution. My other fav slowburn fics are usually around 100-180k words and the resolution starts about 60% of the fic in. I'd say chapter 13 out of 18 or 19 is a very good place for something to finally happen.[5]

Much like with anything else, slowburns are subject to taste. Whereas some think waiting for two chapters is a slow burn, others think chapter 10 is too fast.

I can't even offer a personal opinion on this, since my two long running stories have different pacing when it comes to the romantic sideplot. While in one they get it on in chapter 7 (not necessarily in the good way), and then dance around each other awkwardly and guilt ridden until chapter 30, the other fic waits until the end until there's any sort of movement in the romance.[6]

This lack of consensus among fans has led to fans of slow burn fic complaining about the term's misuse. There are two main camps of "slow burn" definitions: ones based on the in-fic chronology of a relationship and ones based on the meta-level investment of a fan in the relationship. The latter type of definition is more common, although the base "amount" of investment required in those definitions ranges from 10k to over 100k, but the former is also in use. The segment of fans that think"slow burn" refers the time invested by a fan into seeing a relationship come to fruition, like shippers of Mulder/Scully waiting several chronological years for their pairing to become canon, often complain about the other camp of fans who think slow burn refers to the chronological time spent trying to get characters into a relationship, such as the millennia it might take Aziraphale/Crowley to happen even in a 6k fic. A popular tumblr post by anhumanslovestories explains:


If your fic is 1000 words long, you can’t tag it slow burn. It’s not slow burn. That is a matchstick. And this is my personal bias here but if those motherfuckers you’re writing experience significant forward momentum in their relationship in under 5k words, then that is just a regular old burn. Slow burn should be borderline intolerable and a mistake to start reading at 2 in the morning.

[andhumanslovedstories reblogging their own post to add to it]


If the fic doesn’t have multiple scenes where two people almost kiss but then don’t because of a contrived interruption that they are both grateful for and angry about, until the desperate reader is forced every other paragraph to mutter, “this is fucking ridiculous, this is bullshit, I’m so fucking mad, please update sooooooooooon,” then it isn’t a slow burn. It is a romance and that is a lovely thing but. Slow burns should feel like being set on fire unto your death but the tinder is people not kissing and the spark is people who don’t admit they love each other and the whole thing is. You know. Slow.

sex is great and all but have you ever spent seven hours reading an 80K, 11 chaptered enemies to lovers, fake dating, mutual pining fanfic?[8]

There's an excellent slow-burn fic I read that hasn't been updated since spring 2018 and it STILL gets comments, two this week alone

Still love it for what it is[9]

Me: I love fanfiction with slow burn and slow built relationships, I love the pining and I want to wait 1628 chapters and three eternity before they get their shit together and end up dating

Also me, two lines into the fanfiction: WHY DON’T THEY JUST KISS OH MY GOD THIS IS SO FRUSTRATING IT’S SO OBVIOUS THAT THEY LOVE EACH OTHER! JUST KISS ALREADY!!![10]

I’m so over slow burn fanfics that take like 47 chapters for them to kiss and then by chapter 48 they’re fucking.

Give me slow burn all the way through. Like damn.

It’s not let’s make up for lost time it’s hey we’re both cautious people that like to take it slow.[11] 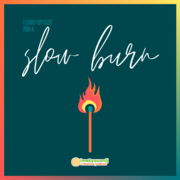 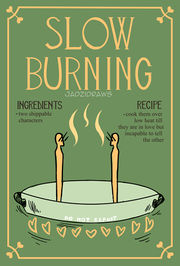 Slow Burning by jadzidraws
The Salvation Series by spiritualmachinesFandom: HansonDate: 2013-12-05–OngoingLength: 298,191 wordsStatus: WIP
A series of fanfics; the first fic takes nearly 50 chapters for the main pairing to consummate their relationship, with their slow progression toward that being a primary plot point.
Angel's Wild by LimonadeGaby and riseofthefallenoneFandom: SupernaturalDate: 2013-04-27–2014-05-04Length: 389,000 wordsStatus: CompleteGenre: Enemies to Lovers, Wingfic
A epic in which Castiel and Dean start off as enemies, and slowly transition to best friends and then to lovers over the course of 52 chapters.
When the Moon Fell in Love with the Sun by MejhirenFandom: Hunger GamesDate: Aug 18, 2012–Dec 25, 2016Length: 360kStatus: Incomplete, very slow updatesGenre: Drama/Romance
Peeta Mellark, winner of the 74th Hunger Games, returns from his Victory Tour to make the starving Everdeens an offer they can't refuse. Canon divergent, based on the fairy tale "East of the Sun and West of the Moon." Little Hunger Games knowledge is required to enjoy this, as it's an AU. Peeta hires Katniss to be his huntress, saving her family, and then most of the plot is focused on them falling in love. 360k in and Katniss has only just admitted to herself how much she loves him, much less to him. SLOWEST of slow burns."
Cursed by lossehelinFandom: Rurouni KenshinDate: July 3, 2011–Mar 2, 2013Length: 317kStatus: CompleteGenre: Romance, Fantasy
A distinctly japanese twist on the Beauty and the Beast tale. AU enough that not much Rurouni Kenshin knowledge is needed. A thousand years ago, the Emperor and his entire court were cursed to be beasts the deadline of the curse draws near as Kaoru's father promises her to the beastly emperor when she is a child. He comes to collect, when she is of age. She is made Lady of the castle, though it will be a long while before they fall in love yet.
The Girl From Whirlpool by SilverShineFandom: NarutoDate: Jan 6, 2010–Mar 18, 2011Length: 248kStatus: Incomplete, but at a decent stopping pointGenre: Romance, Action
When Naruto's father met his mother, his only impression was that a village out there must have been missing its idiot. Minato/Kushina A great fic with lots of world building of the pre-canon era, and lots of wonderful development of the relationship between Kushina and Minato, and their histories. It takes Minato a good way through the fic to realize he loves Kushina, but she's dating someone else by then. It's only in the last scene of the last chapter that they sort themselves out enough to properly start dating.
hot oil spit by faorismFandom: OverwatchDate: Jan 2017Length: 34,079Status: WIPGenre: McCree/Hanzo, Soulmarks
34k in, McCree hasn't met Hanzo yet and likely won't for another 34k based on where the fic is in canon's timeline.
Skin by Usagi SquaredFandom: Yu-Gi-OhDate: Sep 2010–Apr 2014Length: 1,808,934Status: WIPGenre: Jounouchi Katsuya/Kaiba Seto, always a different gender
"Jonouchi Katsuya will always look out for his friends, no matter how weird things get. That means he will keep on fighting, whether facing maniacs with freaky powers, monsters from a children's game, or the fact Kaiba's a girl. Wait, what? Warnings inside" It takes until chapter 99 (out of 121) for feelings to actually be admitted.
Our Bodies Safe to Shore by dharmaavocadoFandom: Star Wars: The Clone Wars (2008)Date: Sep 2018Length: 51,425Status: CompleteGenre: Alternate Universe, Magical Realism, Selkie AU
A roughly 51k word Obi-Wan Kenobi/Captain Rex standalone; this Selkie AU also carries fairy tale beats, and while the initial attraction is apparent at the very beginning, the main pairing dances around the topic of their mutual attraction until nearly the very end.
The Riven Crown by The_KingmakerFandom: The Hobbit (Jackson Movies)Date: Feb 2016–Sep 2017Length: 254,269Status: CompleteGenre: Alternate Universe, Everybody Lives/Nobody Dies AU, Friends to Lovers, Hurt/Comfort, Mutual Pining, Politics
A Friends to Lovers slow burn with an added dimension of accidental engagement. The main pairing, Bilbo Baggins/Thorin Oakenshield, tackles a different approach to a romantic relationship in 31 chapters.
The Case of the Green Gown by splixFandom: SherlockDate: Nov 2014–Jun 2016Length: 209,261Status: CompleteGenre: Action/Adventure, Case Fic, Angst, Whump
Though almost 30 chapters, this more than 200k Sherlock fic steps around the topic of the main pairing until nearly the last chapter.
my heart lies buried like something dead by CinaedFandom: Les MisérablesDate: 2013-01-27–2014-06-07Length: 99,775 wordsStatus: CompleteGenre: Enemies to Lovers, Fix-it
Valjean saves Javert on the bridge. Later, Javert saves Valjean from depression. Slowly, friendship grows and turns to love. They don't kiss until the final chapter.