Zuko is a supporting character of the animated series Avatar: The Last Airbender. He is originally an antagonist and later joins the Gaang. He is voiced by Dante Basco.

Zuko starts the series as the banished prince of the Fire Nation whose only purpose is to capture the Avatar. He spends the entirety of the first season chasing after a bald 12 years old boy and company. Season 2 sees a slight shift of Zuko's allegiance with him becoming a refugee in the Earth Kingdom. He officially becomes part of Team Avatar in the second half of the final season, when he teaches Aang firebending. 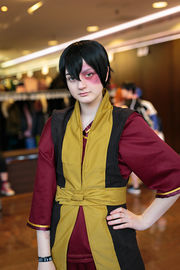 Zuko is a fan favorite, and most fanworks in the Avatar fandom involve him in some way or another. He is renown for his character development and his character arc, which is often used as an example of a good redemption arc. This arc involves him overcoming his abuse from his father and an imperialist mindset and joining the side of the protagonists.

Many Zuko fans cite him as one of their first fictional crushes.