Aziraphale/Crowley is the pairing of the angel Aziraphale and the demon Crowley in Good Omens.

In the early days of the fandom, based solely on the book, ship named included A/C or "Air Conditioning" (more common on Livejournal), and "Consenting Bicycle Repairmen" (a description of the two, taken from the novel). Later, on Tumblr, fans took to calling the ship "ineffable husbands," in reference to God's ineffable plan. This name was partially chosen because "Air conditioning" caused problems with unrelated posts turning up in Tumblr searches. Ineffable husbands became the most commonly accepted ship name as the fandom grew post-show.

Aziraphale is an angel of Heaven and Crowley is a demon of Hell. They met after Adam and Eve left the garden of Eden and have met up throughout human history. The fact that they are supposed to be enemies is a source of tension throughout their relationship. Good Omens follows them as they attempt to thwart the coming of the Anti-Christ and the apocalypse.

Aziraphale/Crowley is the main ship in GO fandom. Many stories take advantage of the fact that the two have been around throughout the entirety of human history

any differences in characterization between the book and the TV show fandoms, what the fandom was like before the show, etc

One fan summed up the differences between Book and TV series Aziraphale/Crowley as:

Since airing, the series and the original novel, have been referred to as a "6000 year slow burn", and this tag has also begun appearing on works pairing Aziraphale/Crowley.

In response to the fandom's boom, The Rec Center newsletter #180 on June 14, 2019, contained "fanfiction + explainer: good omens", a primer/fandom overview by guest editor Kira. On Aziraphale/Crowley, the primer said:

Good Omens has a long history as a slash fandom; while perhaps not a grandparent of slash, it’s at least a favourite aunt. Aziraphale and Crowley’s relationship in the book is that of an old married couple, an interpretation that was only bolstered by the authors’ revelation that post-canon they were sharing a cottage in the South Downs. There are multiple fandom introductions/starter packs, and a great place to dig into the history of the fandom is Lower Tadfield Air Base, a Livejournal community that’s been running since 2003. This was the centre of the fandom for many years, and is meticulously tagged for easy browsing. The recs tag is an excellent place to start if you want to see what people were recommending back in the day.

Common Tropes and Storylines in Fanworks 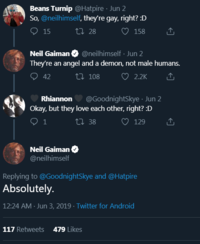 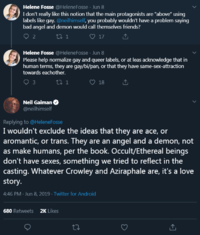 And this has less to do with prudery than with my own comfort levels. I can just about get my head around the concept of Crowley-Aziraphale slash, and would rather not read it thanks. Out beyond that, I don't actually want to know...
-- Neil Gaiman [5] 2003

However, Gaiman's responses seemed to change after the TV series. He commented a number of times on Twitter that he was open to or supported interpretations of the relationship as romantic, but maintained that they are not human males and do not fit into the human conception of a gay male relationship.

Inspired by the Book

Inspired by the TV Series

In line with the gender fluidity typical for fanworks of this pairing, these pieces can be tagged with ineffable wives, ineffable spouses, and ineffable partners.