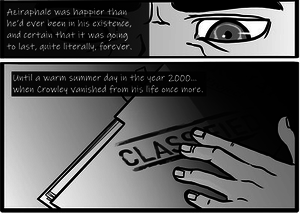 A panel from a fan comic adaptation of Repossession, by the artist THISisGREAT.

Repossession is a popular Good Omens fanfiction where Crowley is kidnapped and enslaved by the Archangel Gabriel. The majority of the story focuses on Crowley and Aziraphale's attempts to free Crowley completely, while pretending Crowley is Aziraphale's slave. The novel-length story focuses heavily on emotional trauma.

Repossession belongs to a newer wave of Good Omens fic written after the release of the Amazon Prime miniseries. It has been translated into Chinese[1] and spawned numerous inspired works, including a graphic novel. The author is co-writing sequels focused on trauma recovery.

"Crowley and Aziraphale's clandestine love affair has spanned the past fourteen years, with Heaven and Hell none the wiser. Or so they thought. Angel and demon alike quickly learn that Heaven can be far crueler than Hell."[2]

The prologue shows an alternate timeline where Aziraphale and Crowley start a romantic relationship after the church situation in 1967, long before the apocalypse. A distraught Crowley comes to Aziraphale's door, after a seemingly harmless temptation ordered by Hell results in the death of a family. They successfully hide their relationship from Heaven for 14 years, until Crowley disappears into thin air.

Crowley is kidnapped and tortured by several angels, until Gabriel decides to take over. Crowley realizes that Gabriel is far more competent and frightening than the angelic henchmen. Back on Earth, Aziraphale gets desperate and attempts to summon a demon. He coerces information out of a minor demon and then kills them. Around a week later, Gabriel comes to Aziraphale's bookshop with Crowley in tow.

Gabriel transfers ownership of Crowley over to Aziraphale under the pretense that Aziraphale will punish Crowley. Crowley lies to Gabriel and says that he was attempting to seduce Aziraphale for Hell. Crowley is wearing an obedience collar that has settings from 1-10. One is disorientation; 10 is a pain as extreme as falling.

The significant remainder of the story focuses on Aziraphale and Crowley attempting to outwit Gabriel, help Crowley mentally recover, and maintain the pretense of Aziraphale as Crowley's owner. The story is interspersed with intense temporal flashbacks to Crowley's time with Gabriel, which included temporary blinding, repeated sexual assault, wing trauma, and a test in front of Archangel Michael, to demonstrate Crowley's complete obedience. A major plot revelation occurs when Aziraphale goes through the records on the collar and discovering that Gabriel stopped time repeatedly, meaning Crowley was gone for two years.

Aziraphale discovers a neutral ground ward to prevent other agents of Heaven or Hell from entering the shop. Eventually, they invite Gabriel in, but only after contacting God Herself. God talks to Crowley personally, emphasizing that members of Heaven and Hell are both her children, bringing the canonical apocalypse to a halt. God allows Crowley to choose Gabriel's fate. After realizing Gabriel will never change, Crowley chooses death.

[Realistic_but_Optimistic on AO3]
"Oh my god this is perfect! Honestly the best Good Omen's fan fiction I've read - you get the tone of all the characters so spot on, they act and speak exactly how I would imagine, and the plot makes my heart ache! I cannot wait for more xx"[3]

[NinaVale on AO3] "Poor Crowley! I must say you've got these two spot on. Crowley "fell" but he never lost his heart. He only inconveniences people at best when he's got to do something and he does it so hell won't complain. It's just a job for him, but he doesn't want anyone to get REALLY hurt. He is more like a trickster god or a pixie/fae creature that just plays little pranks on humans; than a proper demonic entity from the Christian religion. So he'd totally be devasted if his actions concluded in actual, honest to god deaths of innocents. It's good that Aziraphele is there, and is understanding and willing to help and heal. I also like how you made him a bit ruthless, I mean he is an angel after all, and angels can be cruel and tough and stern. Aziraphele chooses to be kind and sweet but in the book killing Adam was his idea. He was going to commit child murder to save the world and stop Apocalypse. So it wouldn't be OOC for him to keep a violent man dead. I mean this guy is already a bad person, why not let him suffer in hell where he belongs? It's only right to punish sinners.

The confessions were sweet, and I'm glad Aziraphele made note of Crowley's drunken state as something to consider and decided to have the conversation and affections next day. People can't really consent when they're drunk. This bit was so healthy and considerate. Kudos for that.

Well...peace can never last long when you've got two warring and not-so-different-in-their-cruelty sides on your back. Poor Crowley, I do hope that Aziraphele finds him or when Gabriel gets bored, he lets him go so our resident earth angel can get to slow healing and putting back together. I'm also looking forward to some anger and mulling over how horrible archass is."[2]

[sweeneybird42 on tumblr]
"So how does it feel to write a fic so amazing it has created an entire AU fandom? Love Repossession. Love the fan works. So excited for the AU of and AU. Write at your own pace, but know you carved out this amazing chunk of the GO fandom to call your own. You should feel proud."[4]

[dreamsofspike (author)]
"It is… overwhelming.

In a really awesome way. <3

It feels amazing to think that I can continue to play in this universe, to make more content for it and enjoy the content that others come up with, more or less indefinitely… since I have NO desire to say goodbye to this fic/universe anytime soon!! <3 <3 <3

I am just so very deeply moved and honored by the response to this story that I had NO IDEA was going to take off the way it did!!"