In a 2017 article about the pair winning Tumblr's Ship of the Year, the New York Times' Jonah Engel Bromwich summed up the massive appeal of Klance. "[Voltron fans] have latched on to the chemistry between the solemn loner, Keith, and the goofball sharpshooter, Lance." [1]

The scale of popularity surrounding Klance oftentimes broke into the mainstream. In June 2018, FANDOM's Senior Content Analyst Maggie Owens wrote, “Not only are Keith and Lance the most popular pairing in FANDOM’s shipping community (the Klance page has been visited over 50 thousand times in the past year), they’re a clear favorite across the internet.”[2]

The Bonding Moment is often referenced by fans

Lance and Keith weren't always friends. Lance constructed a one-sided rivalry with Keith in his head before the events of The Rise of Voltron, as is evidenced by his constant need to one-up Keith––"Y'know, Lance and Keith, neck-and-neck?"––and Keith's confusion upon first meeting Lance. Lauren Montgomery confirmed in an interview that Keith doesn't reciprocate Lance's notion that they are "rivals" and only ever participates in their tug-of-war when goaded into it by Lance. Despite their clash, their rivalry slowly shifts from feud to genuine friendship after a Bonding Moment where Lance assures Keith that they make "a good team." Keith and Lance's relationship undergoes the most development through the series, with both characters supporting the other's growth.

Season three shows their relationship shift from rivalry to partnership and is generally seen as the most important in their development. After takes over the title of Black Paladin from Shiro in Changing of the Guard, Lance steps up to become the Red Paladin and Voltron's "right hand," and the two change from reluctant teammates to partners. Keith also helps alleviates Lance's insecurities on his place on the team in Tailing a Comet and in a fan-favorite line advises him to "leave the math to Pidge."

Keith and Lance form the wings of Voltron

Their evolving relationship is also shown later in the series during The Feud! when faced to choose one member of their team to save from an interstellar gameshow, Lance and Keith pick the other, and again in The Journey Within when the duo unlocks the wings of Voltron together to reach Earth. Many fans find these scenes as instances that support the ship, as they focus on the trust both Keith and Lance have in the other.

While season eight is broadly criticized throughout the Voltron fandom, Keith and Lance are provided ample heartwarming scenes cementing their importance to each other. In Launch Date, after struggling to better understand Altean customs for a date with Allura, Lance seeks out Keith while dressed in pots and pans as makeshift armor. He finds Keith sitting on top of the Black Lion, watching the sunset. After being surprised by Lance’s appearance, Keith reminds him of his strengths as the two watch their last sunset on Earth together. They share a lingering gaze that mirrors the look they exchanged during their infamous Bonding Moment.

When Lance’s sister Veronica brings up the possibility of Lance setting her up with his “long-haired” friend. Assuming she means Keith (although she never brought him up), Lance turns ultra-defensive and not only refuses but is so adamant that he rants off-screen for a solid minute. During Uncharted Regions, Keith and Lance share their worry for Allura and reflect on their friendship and how they’ve helped the other grow.

Keith and Lance reflect on their relationship in the finale season

Due to controversial narrative choices, Keith and Lance’s relationship is left open-ended with both being single during the finale. "Gone are the days of being naive, arguing rivals. Now they’re partners who have each other’s back in battle and in life," wrote Chrissie Miille in her review for FANDOM. "While it comes toward the end of the series, it’s a perfect segue into the future of their relationship. It instills the hope that, when the time is right, they’ll realize their true feelings for each other and take the next step forward together." [3] In a series known for its inconsistent storytelling and uneven character arcs, Keith and Lance's relationship (whether platonic or romantic) has been viewed by fans as the most steady and satisfying in the show.

Klance is the Juggernaut Ship for the Dreamworks/Netflix animated series Voltron: Legendary Defender. Klance vs Sheith was a significant ship war.

Archive of Our Own Legacy

Dirty Laundry, one of the first massively popular Klance fanfic originally hosted on Archive of Our Own in late 2017. It was sometimes referred to as the Klance "bible"[4] as it helped develop much of the early fanon and headcanon for the ship. (Not to be confused with the fan favorite shipping meta The Klible, by smugkeith.)

At the height of its popularity, Dirty Laundry was the second-highest kudos story on Archive of Our Own.

Works in fanfiction include a large number of AUs including Modern AUs and College AUs. As of 2020, Klance has over 30,000 stories under the Archive of Our Own tag for Voltron: Legendary Defender more than double that of most ships.

Forms of Klance shipping existed before Voltron: Legendary Defender aired in 2016, enduring in some form in the Voltron fandom since the 1984 Voltron: Defender of the Universe cartoon, and even in the 1981 Japanese anime Beast King GoLion.

Part of the reason that Klance has shot to popularity so quickly is that it fits in with a lot of established ship tropes. The red/blue color combo, love/hate antagonism, fire/ice, and loud/quiet personalities are all hallmarks of many popular canon heterosexual romances in media as well as LGBT ones.[5]

Although Voltron: Legendary Defender's aired its final season on December 14, 2018, Klance remains an active fandom even after the series has ended. It ranked 8th in the 2020 edition of the AO3 Ship Top 100 and has ranked first for Tumblr ship of the year in 2017, 2018 and second in 2019.

The popular saying originated from twitter user Lucky Luciano (@LuckyLucianoOG) on September 4th 2017, who tweeted the phrase "klance is cannon king" as a request from his twitter following. It spread very quickly throughout the corners of the fandom and was coined as the ship's official catchphrase, used mainly to express joy whenever fans received ship fuel. The saying has been borrowed and adapted by other fandoms and ships ever since.

Many fans headcanon that Lance is bisexual and Keith is gay, but neither character's sexuality has been confirmed as such by either canon or Word of God by the crew. 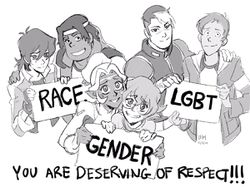 However, on November 9, 2016, Co-Executive Producer Lauren Montgomery tweeted a drawing of the paladins with the caption, "You Are Deserving Of Respect!!!" where Shiro and Lance both hold a sign labeled LGBT. [6]

While not a direct confirmation, the illustration seemed to align each paladin with a sign that reflected their character. As Shiro was later announced to be gay all along,[7] it was enough for fans to infer that Lance could be read as bisexual given his infatuation with both Allura and Keith throughout the series.

In a June 2018 interview for FANDOM "Behind The Shipping of Voltron,"[8] Executive Producer Joaquim Dos Santos and Co-Executive Producer Lauren Montgomery shared their warmth on Klance and its popularity within the fandom. 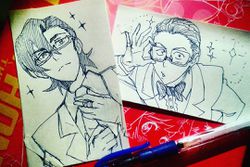 A sketch of Keith and Lance from Barlee's twitter

"The Klance ship is one that maybe comes together from a little bit of that opposites-attract situation where you have two characters that really don’t get along and you want to find that path that ultimately leads them to each other." - Lauren Montgomery[9]

During the interview, Joaquim Dos Santos shared the example of his mother "shipping" Cybill Shepherd and Bruce Willis in the 1985 comedy-drama television series Moonlighting as a similar dynamic. 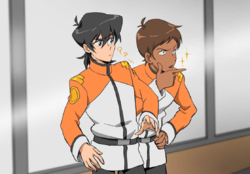 Artwork by Barlee of Garrison cadets Keith and Lance

"I think the ship between [Keith and Lance] is that their character arcs have one of the biggest evolutions of the show. They started off in one place, their relationship has evolved, and I think shipping them is just continuing that evolution and its natural progression.” - Joaquim Dos Santos[10]

Though not outwardly shipping, storyboard artist Barlee [11] has shared various sketches and prints of Keith and Lance. Notably, many of her drawings depict the two as Garrison cadets together, something the series only showed once as a flashback in the episode A Little Adventure.

During the Voltron: Legendary Defender panel at NYCC 2018, the cast shared their favorite clips of their characters from the series in anticipation of the show's final season. Jeremy Shada, the voice actor for Lance, chose the clip from the show's pilot where Lance spots Keith, interrupts his rescue of Shiro, and re-introduces himself as Keith's rival. This scene is a fan favorite and often noted as Keith and Lance's meet cute. [12] 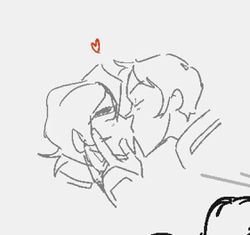 Whiteboard doodle of Keith and Lance kissing, tweeted out and retracted by storyboard artist Angela Kim. 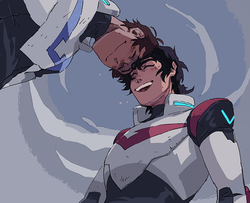 Klance fanart by Chartron, who had briefly worked on the show during S1

Given the size of the fandom, Klance enjoys an abundance of fanworks across fanfiction, fanart, comics, zines, and doujin. 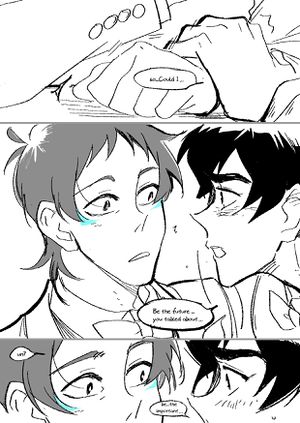 "little beginning after a few years" comic by KIU

With thousands of stories to choose from, Klance is known for having a wide variety of fanfiction. Stories that have gained a certain about of notoriety or were popular during the first two seasons of the series have been affectionately called "klassics." 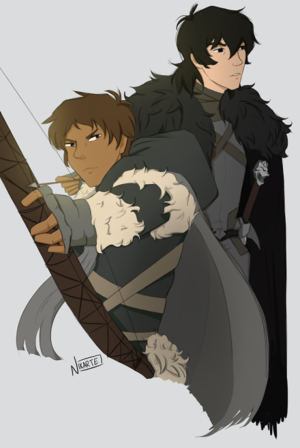 the bastard and his wildling by nikarte, a Game of Thrones AU fusion. As of August 2020, it had more than 990 notes on tumblr. 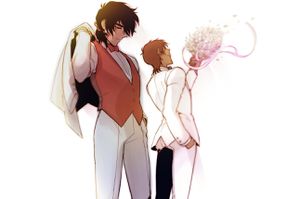 Art by UNKY of Keith and Lance at Shiro’s wedding

Often seen as a gateway to Klance, the fandom enjoys a plethora of artists across the globe who have created art for the ship. In an interview with the New York Times, Amanda Brennan, Tumblr's Head of Content Insights and Social, shared that a large part of its appeal is from artists. “On Tumblr specifically, a lot of the content about Klance is really cute fan art. [14] 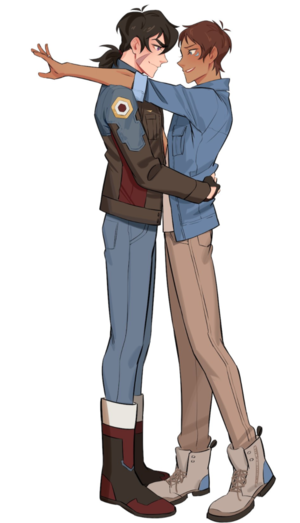