Danger Days: The True Lives of the Fabulous Killjoys 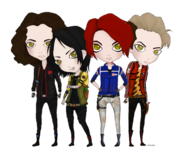 Group portrait of the band in character as the Killjoys; digital fan art by audi-elise-way (2011)

Killjoys or Danger Days verse refers to the canon and fanon universe and works created around the promo and material related to My Chemical Romance's fourth album, released in 2010.

Much like The Black Parade, Danger Days was a concept album whose songs, videos, merch, promo material etc. told a cohesive and dramatic story. The universe was carried over through costumes and props worn on tour by the band. The story would later be continued in a comic book of the same name written by frontman Gerard Way and Shaun Simon with art by Becky Cloonan.

The story is set in California in 2019 and focuses on the fight between the Killjoys, a group of colourful rebels, and a monochrome megacorporation known as Better Living Industries, or BL/ind, and its minions- Korse, the Draculoids, and S/C/A/R/E/C/R/O/W.

The main narrative is told in the videos for singles Na Na Na and SING.

The album was teased through a number of means - the band's website, a number of Twitter accounts - creating a virtual treasure-hunt for fans, hyping up their excitement and whetting their imagination.

The "Art Is The Weapon" teaser/trailer came out Sept 17, 2010[1], sending fans into a frenzy, giving birth to the first Killjoy fics in a matter of days.

For a long time the fans waited for the third Killjoys video which would fix or conclude the events of SING. The video was never shot due to budget issues.

Characters appearing in Killjoyverse canon are:

Note that the Agent Cherri Cola and Tommy Chow Mein accounts strongly differ from the characters portrayed in the comics.

Themes of the album and narrative include growing up on your own terms, life and death and sacrificing yourself for those you love, breaking the rules, eschewing expectations. In the words of Gerard Way:

"A lot of the elements of the setting are completely metaphorical for the real stuff that's going on in this album," explains Gerard, "which is a struggle of art vs. commerce and filth vs. corporate clean up, and freedom being a dangerous chaotic thing that's very hard to achieve, versus a kind of utopian situation where you're very safe and everything's very easy, but it's also very boring."[4]

Fans took the canon elements and ran with them like they were chased by Dracs. They expanded on the universe, building prequels and sequels, integrating other Bandom characters (ex-MCR manager Brian Schechter and ex-member Bob Bryar, Pete Wentz, etc.)

However, tagging in Killjoy stories might use Killjoy names or real names to indicate pairings (so that the same story could be tagged Party Poison/Fun Ghoul and/or Frank/Gerard, and indeed often is), and given the prevalence of crossover fics, where Party Poison and Gerard are two distinct characters, it is hard to run exact numbers in terms of pairing popularity.

Still, it can be safely said that the main ships within the Killjoys universe mirror the popular ships within the RPF fandom for the band, with Fun Ghoul/Party Poison as the juggernaut ship.