From Fanlore
< 9
Jump to: navigation, search

9/10ths of the Law by tsukinofaerii is a popular[1] Stiles-centric Teen Wolf story. It is an example (possibly the most popular one) of the demon!Stiles trope in fanfic.

The multifandom trend in creating demon-eyed character fic and art may have been inspired by Supernatural, where characters who are possessed by demons have filled-in black eyes. 9/10ths of the Law, like some (but not all) demon!Stiles stories, is actually a Supernatural crossover — Sam and Dean put in an appearance — so its demon rules follow Supernatural canon. However, Stiles' backstory in the fic is also reminiscent of the plot twist in the YA novel Demon's Lexicon by Sarah Rees Brennan; the demon has possessed Stiles' body since birth and now sides with his found family instead of other demons.

9/10ths of the Law also features the Derek/Stiles pairing. 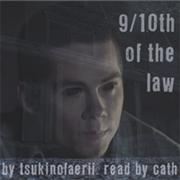 The story was podficced twice within a month of being posted: by melthedestroyer and by cath. The sequel was podficced by mothlights.

[From epic recs:] I love that his mother affects him so deeply, and that he starts having human reactions despite a millennia's worth of memories. Tsukinofaerii makes Stiles' more selfless side believable, so that he's the loyal Stiles we know and love, even as we never forget he's a demon. His friendship with Scott and his relationship with Derek are a joy. The AU take on the show makes for a new perspective, and the cameo crossover with Supernatural is a stroke of brilliance.[2]

Demon!Stiles, but he’s great because he’s Stiles and always has been, he just hasn’t mentioned everything that he is. (Bonus: Winchesters) Also use of the term ‘meatsuit’, which both chills and tickles me.[3]