9 is a movie directed by Shane Acker and distributed by Focus Features. It released on September 9, 2009, or 9/09/2009.[1] The film was based off of Shane Acker's student film, which revolved around a similar plot line with similar characters. [2]

The main characters are nine small, robotic dolls (called stitchpunks) created from a scientist's soul fragments, who are named the numbers 1 to 9. The titular character is 9, voiced by Elijah Wood.

9 takes place in a post-apocalyptic sci-fi/steampunk world where humans built war machines that wiped out all organic life on Earth. In order to keep humanity going, a scientist used alchemy to split his soul into nine parts. The soul fragments were placed into small, robotic dolls, which could live on in a world hostile to organics. In the Russian version the souls come from parts of the scientist's family, rather than just the scientist himself.

An unknown amount of years after numbers 1-8 have been awake, the protagonist, 9, finally awakens. He quickly makes waves in the community. 1 does not like him, he accidentally causes 2's death, and he brings an old evil back to life: an artificially intelligent robot that manufacturers war machines to seek out the remaining souls on Earth. The machine builds smaller machines to capture the characters.

After 9 finds out that a talisman he has is the key to saving his friends, he creates a plan to destroy the machine, with 1 then sacrificing himself in the process. The talisman sucks the stolen souls out of the machine and it explodes.

In the end the only characters alive with bodies are 9, 7, and the twins 3 and 4. They build graves for their lost friends and release their souls, to which they have the opportunity to silently say goodbye before the souls ascend into the sky. From there rain containing microscopic bacteria falls upon the Earth, bringing hope for new organic life to sprout. 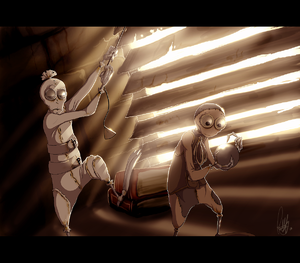 Full a full list of characters, including machines and humans ,on the Wikipedia article.

Despite the age of the film and its small fanbase it still retains an active and tight-knit fandom. There are a handful of fans who have been around since the beginning and still remain. Those that aren't active may still be found in the yearly 9 stream that is hosted every September 9.

Original characters are popular in the fandom due to the unique appearances and aesthetic of the stickpunks. OC stitchpunks often, but not always, have number names, following the convention in canon. Their background may or may not be that they were created by and have the soul fragments of the same scientist as the movie's characters. OCs are constantly made and shared, particularly on DeviantArt. There are also small, active roleplay groups on DeviantArt as of 2019 that function through Discord servers.

A list of fan terms can be found here from The Source, though many are only for use within The Source's roleplay universe.

Like with most inhuman or inorganic characters, fandom finds a way to make reproduction possible. The most common way for stitchpunks to be intimate and have children is through soul bonding/soul binding.

Soul bonding is very similar to spark merging from the Transformers fandom. It involves two stitchpunks opening their bodies, pressing the openings together, and letting their souls mingle. If a character does not have an opening on the front of their body one must be ripped open. Soul bonding is a pleasurable and emotional experience. The characters may share a telepathic bond and be able to hear one another's thoughts during the act.

During soul bonding there is a chance the two souls may combine and form a new, smaller soul. This soul will attach randomly to one of the stitchpunks where it will then feed off of their soul. The couple will then need to build a physical body. Once the body is finished, and once the soul is strong enough, it will be removed and placed into the new body. Whether the body is child sized or appears full grown is up to the writers. An older, and much more rare, form of sex among stitchpunks, is done with the use of rods and a slit. This is a more human approach to sex. One may have a literal metal, rod-shaped phallus, and the other may have a simple slit between their legs. However, it does not seem common to imagine pregnancy or children resulting from this.

On the 9 forum there was a joke that stitchpunk sex was called "friction," though most of the references to this are hidden behind members-only threads.[6]

Considering the large number of characters there is a wide variety of ships to pick and choose from. Ships can be written as #x# or #/# interchangeably, and ships do not have any naming convention outside of this. Some of the most popular are 9x7, 5x9, 5x6, and 1x8.

Inside the fandom 3 and 4 are often considered siblings. Despite this it is easy to find those who ship them together on the fan forums.[7] However, whether or not they are truly siblings is debatable, since every one of the stitchpunks come from the same man and are all part of the same soul. 3 and 4 being siblings could easily be argued against considering that their souls are technically just as related as 9 and 7's. An argument against this could say that regardless of their souls coming from the same man, their relationship in canon is still relatable to siblings and thus shipping them is still incestuous.

The fandom also contains a few crack ships, most notably 1xCape and 8xMagnet. 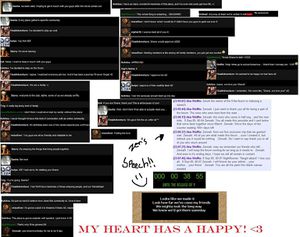 There are a handful of 9 communities, most inactive. The main 9 forum, simply called "Movie9 Forums," or "The 9 Forum", sported an active roleplay subsection. Mature content roleplaying also used to occur here, in a board that was password protected. After Proboards terms of service changed, all not safe material had to be purged. Instead, a separate mature forum was created in 2010.

The Source was once a booming roleplay forum for 9 original characters. Weather systems were even kept up for a time. They eventually moved to a new site in 2012, and the old forum became an archive. The second site also became inactive very quickly after that. On Jan 11, 2016, an admin from The Source (named Kite) posted in the chatbox "Lays a flower as well. But! For those of you old and new fans of 9 or even past members of the Source, keep an eye on www.carnivele.com for upcoming stuff! ;)" For some while, this website had "coming soon" on it and nothing more. But as of 2019, the link takes one to a blank "404 error" page.

Some 9 communities were simply small groups on DeviantART chats before such chats became abandoned by most DA users. A number of Discord chats are active now instead.

In 2019, the 10th anniversary of 9, two fanzines were released, one for charity and one for free.