Pregnancy is often used as a story trope both in fanworks and in canon. Most pregnancy stories involve a woman being or becoming pregnant, but mpreg, male pregnancy, is a genre with its own fans. 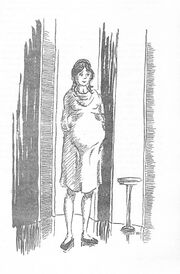 a rare example of a pregnant woman portrayed in fanworks; interior art by Anne Davenport from the Star Trek zine R&R #15 (Springtime 1981)

Pregnancy fic can be written as a variety of curtainfic, focused on the domestic details of preparing for the birth and its effect on the couple's relationship, and often continuing with kidfic. It may also be used as a plot device to create conflict or drama, especially if the pregnancy is accidental.

The pregnancy of female characters in canon often provokes strong mixed reactions from fans. Some fans see many canonical pregnancy storylines as a way of relegating strong female characters to domestic roles. For example, many fans of Tonks in Harry Potter fandom disliked the way her pregnancy seemed to be used to move her out of an active role through most of the final book. Other fans have argued against what they see as the unfair assumption that a character's pregnancy means that she is becoming a less strong or interesting character.

Pregnancy story-lines in tv canons are sometimes prompted by the real-life pregnancy of the actress portraying the character. These may or may not be dealt with well, and depending on the genre of TV, the baby may be done away with in a kidnapping or miscarriage storyline to avoid having to introduce a young child into the storyline.

Pregnancy in scifi and fantasy canons is often magical or unusual in some way[1], and may play on horror or science fiction tropes about "demon babies" or forced impregnation by non-human beings. Stay Awake, a fanvid by Laura Shapiro, critiques the forced impregnation trope using examples from several television shows. (It is necessary to join the site in order to view the video; it does not appear that a credit card is necessary when taking the Free option).

Pregnancy fic has a wide variety of tones and tropes due to the unpredictable nature of pregnancy itself and the way media presents it.