Initially introduced as a cocky fighter pilot with attitude and a dislike of authority, over the course of the reimagined Battlestar Galactica series, Kara Thrace is shown to have many more layers than were initially obvious.

"Kara's story could easily have been a fantastic example of the Campbellian "Hero's Journey", the epic standard by which most of the most famous icons of literature can be held. And fighting through accident, osmosis, or maybe even planning that just fell through, Kara still manages to transcend that. She is a Campbellian Hero. Her life is a central arc by which the entire show can be judged as companion to her tale. And not only that, but it is her life as an individual--she is no cliche female character existing solely for a journey of romance."[1]

The Character in Canon

The character shares some similarities with the Starbuck from the original Battlestar Galactica series -- for example cockiness, a tendency to flirt, and a love of cigars and gambling. The main notable difference may be gender: in the original series, Starbuck was male.

Due to her engagement (until he died, prior to the start of the series) to his youngest son Zak Adama, the commander of the Battlestar Galactica, William Adama treated her like a daughter, which let her get away with a certain level of flouting of authority and rules. The theme of being part of Adama's family in various ways was an important one for the character throughout the series, especially as her own mother had been abusive and her father largely absent.[2]

Another important theme was Kara's destiny (a.k.a. "The Destiny"). From an early age, her mother had inculcated in her the belief that she had a special destiny to fulfill. Events over the course of the series supported this.[3]

Kara's canon romantic relationships were as complicated as the character, often being categorizable as on-again, off-again.

The Character in Fanon

While earlier fanworks focused on Kara's canon and non-canon relationships and character arc, after the series finale aired, many fix-it stories that kept her on Earth were written.[4]

In fanworks, for longer-term het relationships Kara is mainly paired with her canon partners Lee Adama or Sam Anders.[5] There are also a number of Academy Era fics, set pre-canon which examine her relationship with Zak Adama.

Works pairing Kara with the cyclon Leoben Conoy, often focus on his unhealthy obsession with Kara and may be tagged as dubcon.

Femslash pairings are rarer, but Starbuck has been shipped with Laura Roslin, Helena Cain, Anastasia Dualla, and also with cyclons, Sharon Valerii and Number 6. 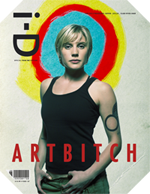 Art by Deej created for the vid Art Bitch