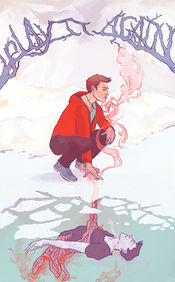 Play It Again cover by Villainette

Play It Again is one of the most popular fanfics in the Teen Wolf fandom, and is widely considered a classic.[1][2] It was written by metisket and podficced by mothlights, and is a Derek Hale/Stiles Stilinski pre-slash canon AU written at the beginning of season 3.

On 27 July 2014, metisket posted a side-story titled This Doesn't Hurt focused on Isaac and Melissa, from Melissa's POV.

On 8 August 2020, metisket posted another side-story titled Kiss of Death that is a follow up to the main fic, about Stiles' 18th birthday party.

In which Stiles goes along with one of Derek’s plans and ends up in an alternate universe as a result. He should’ve known better. He did know better, actually, and that means he has no one to blame but himself.

“Laura wants to lure the kid in with food and kindness and make a pet of him, like a feral cat. Derek wants to have him arrested for stalking. They’re at an impasse. (And the rest of the family is staying emphatically out of it in a way that suggests bets have been placed.)”

Play It Again has drama, suspense, brilliant character voices, humor (often in the form of Stiles' wry observations), and the situation makes for a terrific plot.

metisket drops Stiles into an alternate universe that's a hell of a lot softer than the one he came from. If he seems badass, it's partly because of all he's been through with things going to hell back home, but mostly because he's landed in a world where the other characters we know haven't had to deal with much danger. A strong Hale family under the leadership of Talia Hale polices the supernatural, and Derek is one of a slew of family pack members...

Which brings us to Derek; he's very different, but in a way that actually explains a lot about the maladjusted Derek we're used to. This is what happens when Derek feels safe and never makes the big decisions. And when he's got an alpha-material big sister pushing him around and looking out for him. He's drawn to Stiles, but he can't figure him out. Stiles knows things he shouldn't, and his heartbeat reacts to the strangest things.

Sheriff Stilinski is great here, as is a Scott who hasn't met Allison yet. The Hales are all well written -- especially Laura and Peter.

I love heartache and humor together, and I love suspense, so I tore through this one in a day. It's a great read. -mothlights's rec on Epic Recs.[5]

Man, these people are just so vibrant, even the original and little used characters. The Stiles/Derek pairing—even though this story is all pre-Sterek—is unexpectedly perfect. The author had a fresh take on their relationship, so it never played out quite like I was expecting. But it played out just right, totally believable and organic. But it’s not just them. The relationships between Stiles and the others, like Scott and Lydia and the various members of the Hale pack, just felt so natural, vibrant and three-dimensional. -Excerpt from The Sterek Collection's rec.[6]

This is actually two AUs for the price of one; the reality Stiles starts out in is not the canon universe, but one fairly close to it. I love the way the two AUs play off of one another and relate to one another, and I love the way Stiles has to figure out what the differences are and how to live in his new reality, and I love the way his friends and family and the Hales react to this new and different Stiles. This is just a fun story that I really love. -beatrice_otter's rec at Best Thing Ever[7]

Many fans had more complicated feelings than pure squee, particularly after the ending, which metisket stated was the intention.[8][9]

Oh, I am so torn over this ending! Not Stiles staying, or him and Derek, but the way the overall omegas/pixies/Gerard situation was resolved.

On the one hand, it was perfect, and it made so much sense and was necessary for Stiles to ultimately be not directly involved. It's the realisation that he's, how do I put it, arrived? Relieved of carrying everything himself? It's not Stiles alone frantically trying to cover all his bases and keep everybody safe, it's Stiles as part of a group who has his back and will carry the burden for him. He doesn't have to be a soldier anymore, he's one of the kids again, he'll be kept out of the line of fire and protected. It's the realisation that this world has turned into a home.

On the other hand, even though I do understand the reasoning (or one interpretation of it), the anti-climatic resolution still felt, well, anti-climatic to me, and part of me found it unsatisfying that there wasn't some kind of action to fill my built-up expectations, like a quick run-in with one of Gerard's followers, or a panic attack brought on by an accidental scare of Peter's. It's like, even though Stiles has relaxed, I can't, because I can't believe the story would end without something bad going down (on-screen, directly involving Stiles, and with big emotional impact, not off-screen like Philip getting shot being casually mentioned as bad news).

I'm not sure I managed to make sense. It doesn't take anything away from the fic as a whole, that is just incredible, and, again, part of me thinks the ending is perfect, finally negating the need for Stiles' hyper-vigilance and giving him closure by having nothing horrible happen. But another part of me wanted one last burst of excitement, to let me feel that closure, let me feel like something had happened and was now over. -des_pudels_kern's review.[10]

I have such conflicted feelings about this story (which, don't get me wrong, is absolutely awesome) because I can't help grieving for everyone in the canon verse dying. I'm happy for Stiles that he gets to rebond with all the important people but they're not the real ones and that's a terrible loss. I have a suspicion that Stiles' nightmare was actually a vision about Scott and his dad's death because he did have the new binding tattoo which could be picking up echoes from the old one. I even also feel awful about this universe's Stiles' death. He's basically going unmourned (except by the Sheriff and even he's bonding to new Stiles) and no one knows his dead. That's really sad.

On the plus side, I'm as shocked and delighted as Stiles that the adults are competent and handled the problem without him. This is a world where he can relax some of his hyper-vigilance and have a relationship with a Derek who is capable of loving him back. That is utterly awesome.

Still. So conflicted. Wonderful story and I was fascinated up to the very end. -Caro_Dee's review.[11]