The OT3 ship Bucky Barnes/Steve Rogers/Natasha Romanova was already popular from the comics and from before the movie. After the movie, several shippers produced Bucky Barnes/Steve Rogers/Sam Wilson works as well. A small subset of fans incorporated all 4 characters into an OT4, or the gen version of it. Some shippers prefer to make some of the relationships within the group non-sexual, while still incorporating all four characters into a relationship of some form.[1]

This ship is often referred to as the Barbershop Quartet, inspired by a line in Captain America: The Winter Soldier.[2]

This ship is not yet as prevalent as the OT6 was after the first Avengers movie, but it shares many of the same Found Family tropes. 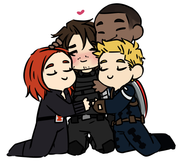 we’ve got backup!, additional panel to the fancomic, operation make bucky happy is a success!, by artist sconee, showing the quad in a "cuddle puddle". As of December 2018, it has over 13,400 notes on Tumblr