Steve/Clint, also known as AmeriHawk, is the slash pairing of Clint Barton (aka Hawkeye) and Steve Rogers (aka Captain America) in the Marvel Comics and Marvel Cinematic Universe fandoms. 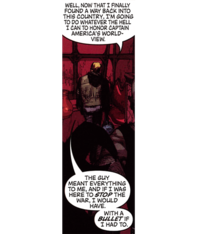 In comics canon, Clint idolizes Captain America. He challenges his authority and mouths off at him often when they first team up, but the underlying respect is always there. At one point when Clint is slated to become the next Captain America due to Steve being temporarily sidelined in canon, he only concedes the shield to Bucky Barnes once Bucky proves he is worthy of Steve's legacy.

Clint Barton and Steve Rogers first meet in The Avengers (2012) film where they become part of a team. They appear together as a team again in The Avengers: Age of Ultron (2015) and Captain America: Civil War (2016). Clint was part of Team Cap, taking Steve's side instead of Iron Man.

However, the overwhelming majority of Steve/Clint fanworks produced are MCU-based where their relationship is less defined which lends itself to various different interpretations.