From Fanlore
Jump to: navigation, search
You may be looking for the Simon and Simon zine, Double Play.

Double Play is a Harry/Johnny and Starsky/Hutch 141-page anthology that takes place in 1979. It has the subtitle: Pair of Possible Sequels and Other Independent Reactions to A Week in L.A.."

Both the Harry/Johnny fandom and Starsky & Hutch fandom have the actor David Soul as main characters, so there is a Same-Actor Crossover element to the zine's content. 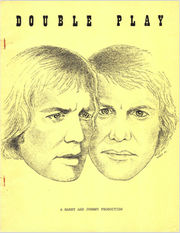 cover art by Marie A

Double Play contains a massive amount of art by TACS and Paula Mathai (half-tone artwork) and pen and ink work by Ruth Kurz, Marie A, and includes an offering by Gayle F, the latter was done as a special favor for Ruth and Marie A.

The zine also contains many black and white screen shots and publicity stills from both Starsky & Hutch and the Dirty Harry movie.

Ruth Kurz wrote in the zine:

Marie asked to dedicate LOOSE ENDS "to Ruth, for support and patience above and beyond the call of friendship." I wish to dedicate DOUBLE PLAY to Marie for writing A WEEK IN L.A., without which there would have been no inspiration for this collection of stories, poetry, and artwork, as well as much delightful conversation and speculation -- and to [TACS] and Chris Lubs for assistance above and beyond the call. Without them, DP would still be unfinished and sparsely illoed, and the supplement a hopelessly disorganized stack of donations sent in, as usual, by the H/J readers, bless them all.

Excerpt from "View from Russian Hill"

Out of the comer of his eye he could see Star sky, still seated on the couch, already gaping at this unexpected image. The newcomer said, "I'm John Davis. You must be Ken Hutchinson." Twins, yet not quite twins. Hutch gazed wonderingly at the other man.

Warned by Harry, Johnny was less surprised than Hutch. After some moments of silence, he raised his eyebrows at the expression of utter stupefaction on the L.A. cop's face, "Harry didn't tell you.... I guess I'm quite a surprise." He glanced at Starsky who was sitting rigidly. "To both of you."

"Shit!" Starsky's comment broke the tension for all of them. He eased off the couch and walked warily around Johnny. "Hey, Hutch, are you sure you weren't one of twins? This is weird, man, really weird!"

He stood between them, eyes flicking back and forth as he catalogued their differences. "Shorter hair, no moustache, ten pounds lighter, a couple of years younger than you. Hutch. Grow a moustache and some more hair on him, and he's your twin."

Johnny smiled tentatively at his double. It was a strange experience looking at himself, but his photographer's eye could see more of the differences which made the other blond a separate person. Hutch's eyes held signs of hidden sorrow, and his face was lined by his experiences on the streets. A sudden feeling of liking for him surfaced in Johnny. For the first time in his life, he felt that he had never been an orphan. Somewhere in the world, another blue-eyed blond child had grown up just like him, sharing his face. They had been ignorant of each other's existence until now, and their meeting was a gift to him from the one

who loved him most in the world. He turned his head to smile at his cowboy. Harry was grinning all over his weathered face. Johnny nodded in understanding. "You set us up," he accused lovingly. He knew his eyes were reflecting his awe and wonder at the magic Harry had produced.