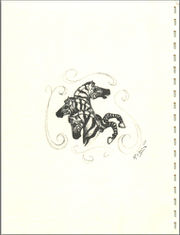 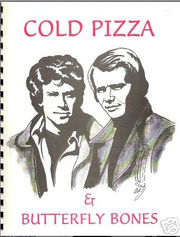 Cold Pizza and Butterfly Bones is a gen and slash Starsky and Hutch 160-page anthology. Story descriptions/warnings on whether they were slash, gen or death were included on the last page. The front cover and interior art is by Brauna Ben-Shane. Back cover art work by Robin K.. This zine won a 1998 FanQ and was nominated for a STIFfie in 1997.

This zine required an age statement to order. In the request for submissions in Black Bean Soup, the editor said: "We will print gen-only editions of this zine if we receive enough gen submissions." (They didn't).

From the editor: "This zine is dedicated to ALL fans: fans of every size, shape, color -- or, for all the pigmentedly challenged among us, lack thereof -- ethnic background, sex, sexual orientation, socio-economic statues, and religious/political/moral stance. We believe that fandom should be a unifying force - one that builds bridges, not walls."

See reactions and reviews for Trails in the Dark.

See reactions and reviews for Drought.

[Talkin' Dirty Pool]: Maybe I'm weird, but I really like the image of Starsky/Hutch destroying Huggy's pool table. The teasing of Starsky's butt movements dancing to the beat of the jukebox wasn't bad either;) It's light, it's fun, it's very visual with the red felt scratched and defiled with naked white boys (as Huggy would say). [1]

[Freeze]: I saw the "life sacrifice," *implied* so many times in canon, I can't help but be drawn to it because of my own ruminations. I greatly appreciate, however, the fact that death stories are a "squick" for a large portion of fandom. I think that's why only a few publishers will deal with it. Flamingo is one that comes to mind immediately; Isabel Ortiz is the other (I still think "Freeze" by CJ Hayes is one of the best stories ever written; it's in "Cold Pizza and Butterfly Bones.") [2]