The K/Star Awards were slash fan fiction awards. They were first announced by the editors of Not Tonight, Spock!:“The K/Star Awards are an attempt to spotlight the writers, artists, poets, and editors who give of their time and talents to feed our addiction to K/S.”

In the past there was some confusion over whether IDICon sponsored merit awards, which were called the K/Star Awards. No record of such sponsorship has been found and in 2018, one of the convention organizers confirmed that they had not sponsored the awards.[1]

There were three award years, and the K/Star Award ceased with the discontinuation of Not Tonight, Spock!. 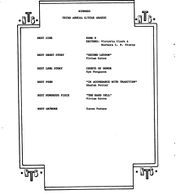