DFKIAS Yearbook is a zine that combines information from and fanworks from members of The De Forest Kelley International Appreciation Society.

Some of the cover images below appear to be black and white photocopies; it is probable that all of the issue's covers were printed on blue paper. Lynn Campion is the artist. In the 1982/83 issue, she writes: "You may notice that I have decided to keep the same picture on the yearbook cover for a third year. This is not laziness on my part (ie it's not that I don't want to draw another picture) but a suggestion was made by some American friends that the "Space Cowboy" was a rather appropriate picture - so, we'll be keeping this for some time and I hope you agree with this action." 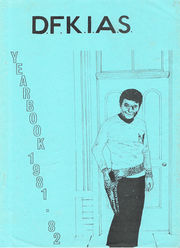 The editor notes that both staff of this zine (Jenny Elson and Marquita), had to step down due to time commitments. The editorial reports on De's appearances at cons, saying he looked good at Space Trek in April 1981, and a little more "tense" at The Ultimate Fantasy in Houston.[1] She asks:

I have mentioned rumour above. Well, PLEASE don't take too much notice of rumours - ask someone you trust to have the right information before flying off the handle and creating waves. Apparently the last rumour about De being ill started in England - where I 'would like to know but if you should ever hear anything and would like it confirmed or denied try writing to me - if I don't know the answer I will contact my American friends who can probably find out the truth for me - thanks girls, your help has been much appreciated thus far. 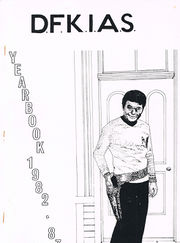 This issue contains 18 pages and was published in February 1983.

Well, another year has passed in the life of this society; a year in which club membership has declined rather alarmingly - has McCoy lost his charisma? I hardly think so, not with such a wonderful portrayal of the character by De Forest Kelley in The Wrath of Khan. The time has come to persuade your friends to join, it's not such a bad idea you know... more members means more contributions and longer, more interesting newsletters! The past year has seen three convention appearances by Mr Kelley, St Louis in April 1982, Houston in June 1982 and Omaha in February 1983. Unfortunately no-one has sent in reports of these conventions so I'm afraid I can't tell you anything about them. Most of you know, however, that I was lucky enough to go to the convention in St Louis and so you'll find a small goodie in this yearbook - I have transcribed part of De's speech for you to read and I'll be doing more of it for the next newsletter which will be due out around May. 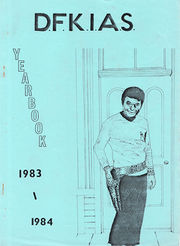 This issue contains 18 pages and was published in February 1984.

Regarding club membership—from the editorial:

Well, having been alarmed by the drop in memberships a year ago I can now say that I'm very pleased by the increase in memberships over the past.year - we now have 80 members, about 60 percent more than in February 1983 - welcome to all the new members, hope you enjoy the publications during your years' membership. Now, if memberships continue to increase and you all contribute to the newsletters we'll be able to have much longer publications!

Regarding the upcoming Trek movie—from the editorial:

Now, the big news that everyone's been waiting for - the release dates of STAR TREK III - THE SEARCH FOR SPOCK - the movie will be released en 1st June in America, 19th October in the UK and 25th December in Australia. Why.they should insist on having different release dates for various countries escapes me, especially since we all know that the plot will 'leak' to us Brits long before it even opens here. It has been suggested that if you feel the movie would have more impact having a simultaneous worldwide release you should write to Paramount. The address I have is for Gary Nardino, Executive Producer, 5451 Marathon Street, Hollywood, California 90038, U.S.A.

Now, I've heard various rumours about this year's Trek movie, I don't believe all of them and I suggest you take most of the following with a pinch of salt, but I thought I'd let you all know what's being said.

18pp. foolscap, duplicated. The annual of the De Forest Kelley Appreclation Society, a small but enthusiastic group. The cover is the only illustration (a very nice one of Cowboy/Dr.) as, like Astrex in its earlier days, finances are hard to juggle; Nice repro. throughout though. This yearbook reproduces an an excellent interview with De Forest Kelley from April 1982 - very informative indeed for McCoy & DFK fans. And two very well written pieces of fan fiction. "Prima Lux" by Pauline Sweetingham sheds light on the McCoy/Saavik relationship after TWOK. It's told without an overdose of sticky sentiment and is all the more effective in its almost "honest" approach. The second, "Only Human" by Tania Price is a moment out of time, a night on the Enterprise of the series and looks at McCoy - man and character. A short but entertaining magazine esp. to we DFK afficianados. Definitely recommended! [2] 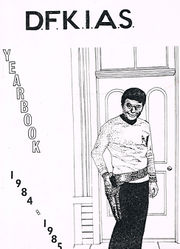 This issue contains 18 pages and was published in February 1985.

From the editorial (which she refers to as a "waffle," a term that some Australian and British zine eds used):

Many of you know Mr Kelley hasaccepted an invitation to be a guest at Midcon '85 -- this has- now been postponed as filming of. STAR TREK IV is scheduled to begin in July and continue through October. In a letter to me, Jenny Elson, one of the Midcon Committee, said, "...although it may have finished by October, De says that there is a chance that he'll be needed anyway for post-production work. So rather than risk not being able to come to England at the last moment, he and Carolyn have decided instead to come in April '86 to a Midccon Special. The contracts are now signed to this effect. We felt that this was very considerate of them both, and as it is only six months later, well worth waiting for. And far better than to string people along, then announce after their arrival that De can't make it. I hope everyone understands ..." I'm sure you'll all agree that this is the best possible solution to events beyond the control of the convention organizers and it is very, very kind of Mr Kelley to agree to come at a later date. You'll find a letter from the convention committee after my opening waffle.

From the "waffle," regarding club finances:

I printed three fanzines last year—McCoy 5 and Full Circle in February, and McCoy 6 in November. I still have thousands, well, okay, hundreds, of these stacked in top of my wardrobe under the desk, under the chest of drawers, in the desk drawer ... you get the picture? So, what I'd like you all to do is to order some of them. Please, pretty please ... McCoy 7 is a possibility for May 1985 if I get a few more contributions. My thanks to those of you who have submitted material in the past—both news letters and zines have increased in size in the past year. Keep up the good work.

One important thing which happened for the club is that it became self-supporting towards the end of the year. For three-and-a half years I had been supporting it from my own bank account but now, at last, the club has an account of its own.... At the time.of writing this yearbook the balance stands a little short of £50 which should be just enough to cover the cost of printing the yearbook and posting it. New members, membership renewals and zine sales between now and the time of the next newsletter shuuld produce enough money to enable the printing of the next, newsletter and zine ... and so it goes on; the juggling act of running a club—anyone want to take over from me?

This issue was published February 1986 and contains 40 pages.

An editor who had departed in 1981 is back: Marquita Crisp. 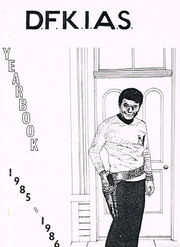 The editor is happy to report that the club now has 96 members.

There is some info about the next Trek movie, and a run-down of what cons Kelley had appeared at over the past year: Creation Con (Anaheim) in March 1985, Shore Leave (September 1985), Delta Con (Louisiana), and Creation Con (San Francisco) in November 1985.

The good news is club finances look good, the bad news is the club is losing its duplicator:

So, you can see, the club is doing quite well at the moment thanks to those of you who have bought zines over the last year. As the remaining balance is quite healthy I propose to purchase a duplicator for the club to use as soon as I hear of one being available. The main reason for this is that Judy and Hilary are moving in two weeks time and AAA Press' duplicator will be going with them. Rather than have to go back to arranging visits and lugging up to the ten reams of paper across London on public transport, our own duplicator would give me more time to work on club projects and there will be no excuses for not getting the newsletters out on time!