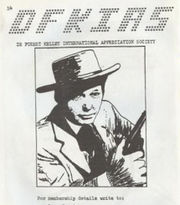 The De Forest Kelley International Appreciation Society was a fan club based in England and active during the early 1980s, possibly into 1990.

Kelley's name was spelled "De Forest" in this club's publications.

It was run by Lynn Campion. Both Marquita and Jenny had to step down due to time commitments at the end of 1981. Marquita returned as a club leader to join Lynn in 1986.

The club's charity was "The British Leukemia Research Fund."

The club had 40 members in 1983, and the editor noted this is a big decline from the previous year.

club finances printed in the 1984/85 issue of DFKIAS Yearbook

club finances printed in the 1985/86 issue of DFKIAS Yearbook, see that page for the plans to buy a duplicator

From the editorial printed in the 1984/85 issue of DFKIAS Yearbook regarding club finances:

I printed three fanzines last year — McCoy 5 and Full Circle in February, and McCoy 6 in November. I still have thousands, well, okay, hundreds, of these stacked in top of my wardrobe under the desk, under the chest of drawers, in the desk drawer ... you get the picture? So, what I'd like you all to do is to order some of them. Please, pretty please ... McCoy 7 is a possibility for May 1985 if I get a few more contributions. My  thanks to those of you who have submitted material in the past — both news letters and zines have increased in size in the past year. Keep up the good  work.

One important thing which happened for the club is that it became self-supporting towards the end of the year. For three-and-a half years I had been supporting it from my own bank account but now, at last, the club has an account of its own.... At the time.of writing this yearbook the balance stands a little short of £50 which should be just enough to cover the cost of printing the yearbook and posting it. New members, membership renewals and zine sales between now and the time of the next newsletter shuuld produce enough money to enable the printing of the next, newsletter and zine ... and so it goes on; the juggling act of running a club — anyone want to take over from me?