Walter Koenig Fan Society was a fan club for the actor who portrayed Pavel Chekov on Star Trek. 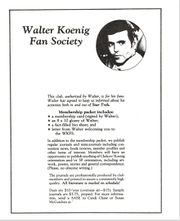 a flyer for the club

This club was an official one (endorsed by Koenig) and followed on the heels of Walter Koenig Fan Club. In 1985, this club's named changed to Walter Koenig International.

From 1980: "The official Walter Koenig Fan Society is authorized and fully supported by Walter. We are built on friendships, communication and the creative process. Membership includes a signed membership card, a glossy of Walter, a bio-sheet and a letter not only welcoming you into the WKFS, but which gives an indication of Walter's feelings for the WKFS. We publish regular newsletters and Journals. Our Journals are set aside for publication of artwork, poems, correspondence from and to members, as well as convention news and Star Trek updates. Contributions from members keep our Journals alive. We want the WKFS to be a club that Walter, as well as his fans, will be proud of and benefit from. To do this, we need your support and your enthusiasm. Let's make the WKFS a success! Membership dues are $6.00/year U.S. and Canada, $7.00 for overseas members. All checks and money orders made payable to Michelle Ward." [1]

From a 1983 flyer printed in the Space Trek program book: "This club, authorized by Walter, is for his fans. Walter has agreed to keep us informed about his activities both in and out of Star Trek." 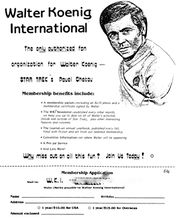