Grip is a gen multimedia anthology of fiction, art, poetry, and commentary edited by Roberta Rogow.

There were 51 issues published.

The series had an emphasis on Star Trek and Star Wars.

Rogow created this zine series to encourage and highlight fans who did not have a lot of previous experience creating fanworks.

Rogow was very out-spoken in her her mission to keep "Grip's" material G, or mildly PG, rated, and the title, "Grip," was a poke at Grup, a sexually explicit Trek zine.

Some regular features were the editorial ("The Editor Shoots Her Mouth Off"), fanzine ads ("Backscratching Department"), and letters of comment ("Air-LoC"), the last two spelled a variety of ways. 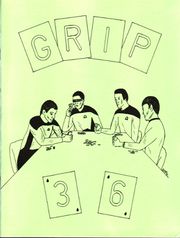 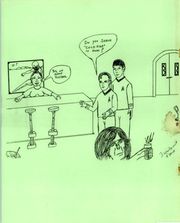 back cover of issue #36, Anna Parrish

Here we are again: GRIP #36! How Time does fly! It's been over ten years since I started this fanzine, and I'm glad to say I've succeeded in what I set out: to do; to give beginning writers and artists a showcase for their work. Some of the people who started with me in GRIP have "graduated" and become professional writers and artists, and some have just continued as Fans. As for me…I'm working madly on my Big Book: "Futurespeak: The Language of Science Fiction." It was supposed to be just a Dictionary, but it seems to be turning into a lot more than that. "Futurespeak…" takes a lot of work, and a lot of Time, which is the subject of today's lecture. Not just how much Time is spent on writing, although Lord knows, I've been spending plenty of it lately. More to the point is the way time elapses in stories, and what we have to do about it. Most of the people who write for GRIP are used to TV or movie storytelling. The camera tells you where you are, and various screening devices tell you how you got there. However, in written fiction there is no camera. YOU have to explain where you are,and you have to account for the time it took to get there. Many SF TV series have some kind of transporter device that gets the characters from here to there so that the story can get going. Those nifty bracelets on "Blake's Seven", for instance, or the transporter on Star Trek are there solely to keep things moving. However, once you are down on the planet, it is going to take some time to get from the Palace at Shikar to the Plains of Gol, and you had better allow for this shift of scenery in your story. Let the reader know where we are, and give us time to get there. 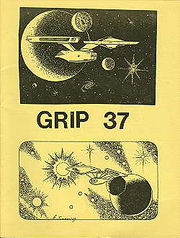 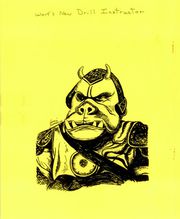 back cover of issue #37, Gennie Summers

I’ve been getting stories both in the "Classic" and "New Generation" mode that involve Klingons...which is the subject of Today’s Lecture. When Gene Roddenberry invented the Klingons in 1966, they were described as "the Mongol Hordes with ray guns". They were supposed to be the all-purpose Enemy, who could be trotted out whenever one was needed. "Errand of Mercy" saw the first (but not the last) appearance of the Klingons: vicious warriors, who thought nothing of executing helpless civilians to impose ruthless order on what they considered a conquered population. They were swarthy, bearded nasties...and they captured the Fannish imagination in ways that the Great Bird never imagined. There were at least three variants on the Klingon culture. One of best was the "Nu Ormenel" series of Fern Marder and Carol Walske which set a Human woman into the middle of Klingon culture. The "Kershu Fighter" stories involved another Human woman and a Klingon martial arts master. Even my own "Dirty Nellie" found brief happiness in the arms of a Klingon lover. With the New Generation and the emergence of Worf we are seeing a resurgence of interest in Klingons, beyond the simple "bugaboo" stage. Just as the popular sentiment has gone beyond the "us vs. them" mentality of the Cold War, so has the public perception of the Klingon gone beyond the ready-made villain aspect. Fans are intrigued by the bits of Klingon culture revealed in ST:NG episodes. Several Klingon-oriented fan clubs and fanzines have been organized in the last few years... Why this delight in Klingon deviltry and destructiveness? Anyone who lives near or must work in an inner-city neighborhood has no illusions about anarchy or violence; they live with it every day. Our newspapers are full of the dangers of random violence. Still, there is something attractive about acting out ones aggressions through a Klingon persona. Maybe we could try to persuade the street gangs to give up their weapons and join in the Klingon Strike Force? Oh well, it was a thought! 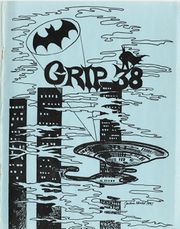 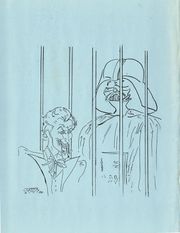 back cover of issue #38, Vel Jaeger

The majority of the zine is a Batman novella. This issue has no letters of comment. 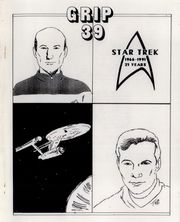 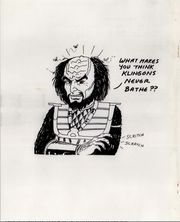 back cover of issue #39, Gennie Summers

Two-score and five years ago, Gene Roddenberrylet loose upon this world a television program so unusual that it was almost doomed before it even got on the air. It pre-supposed a future in which men and women of all the ethnic groups of Earth could co-operate with beings of other planets, to everyones’ mutual benefit, a future in which a hardy group of Earth-born explorers could go "where no man has gone before". This vision of Gene Roddenberry’s was called "Star Trek", and when first saw it all those years ago, I was instantly hooked. Here was a television drama, set in the future, that didn’t depend on cutsy robots or super-villains to make its point...a multi-racial cast, with a mysterious Alien, a Black woman, an Oriental, and a red-blooded American Hero at the helm of a spaceship, leapfrogging across the stars. Stories on "Star Trek" dealt with monsters (who turned out to be mothers defending their young), or technology (not always on the side of Progress), or tolerance for other sentient species, in other words, this was TV for grown-ups. In that dim, far-off time, I didn’t even know about Fandom. I just watched the show...and cheered when it was reprieved, not once, but twice! And I watched the re-runs...and the re-runs...and then I heard about Conventions...and Fanzines... And here we are, 25 years later, and I’m still watching "Star Trek", in the "Classic" and "Movie" and now, "Next Generation" modes. And the Mundanes, those poor souls who are not in fandom, ask "Why?" "Star Trek" still holds up, most of the time, because the dramatic values are THERE. "Star Trek" was a well-written, well-acted, well-produced dramatic series, and it still is. The money goes into the writing and acting, not just the flashy Special Effects. The moral and ethical basis of the "Star Trek" Universe still means something, even though Jean-Luc Picard is less inclined to meddle with affairs of planets for their own good, in the manner of James T. Kirk. 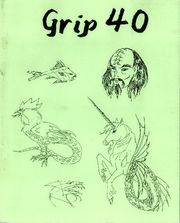 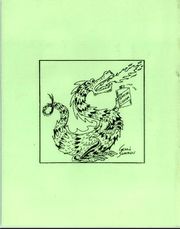 back cover of issue #40, Gennie Summers

People have been kvetching to me about Fandom, how it's changed since the Good Old Days. Well, I've been around for a looooong time (as Fandom goes) and I've seen other Fandoms come and go: Star Wars, Battlestar Galactica, Blake's Seven, Dr. Who, the Prisoner...but Star Trek has managed to outlast all of them. There are more fanzines out there now than there have ever been before. New fans are searching the resale boxes to pick up on what they missed out on. Bill Hupe has gotten reprint rights on some of the grand old 'zines like Masiform-D. The "Next Generation" is not shouldering out the "Classic", not by a long chalk, and now Paramount is starting to weave both halves into a harmonious whole, so that we'll soon have a "Star Trek Universe." What happens next? Who knows? I wouldn't even try to guess, not after the events of the Summer of '91. We won the Cold War, there was a "Coup Klutz Clan", and the Evil Empire is rapidly disintegrating into its component parts. There won't be a World War III, unless it's started by Saddam Hussein in a fit of pique....and Khan Noonian Singh seems to be safely locked up in Afghanistan.