Klingon Strike Force was a Star Trek fan club. It began in 1978.

In 1984, it was under the command of Admiral Keel Epetai K'ta-ri. 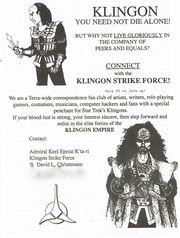 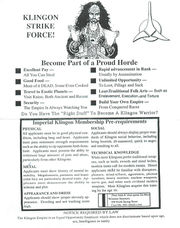 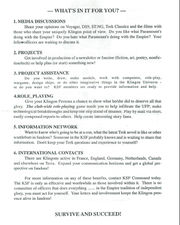 Among other things, it published the zines Behind the Lines and Battle Lines.

From a 1991 flyer: "Klingon, You Need Not Die Alone! But why not live gloriously in the company of peers and equals? Connect with the Klingon Strike Force! Only $5 to join up! We are a Terra-wide correspondence fan club of artists, writers, role-playing gamers, costumers, musicians, computer hackers, and fans with a special penchant for Star Trek Klingons. If you blood-lust is strong, your interest sincere, then step forward and enlist in the elite forces of the Klingon Empire."

I would like to take a moment to make a distinction between the Newsletter and the Agonizer fanzine. The Agonizer fanzine is a publication whereby all Klingons from any club and even those not of Klingon nature, can contribute their thoughts and talents. The fanzine will publish letters, artwork and articles on a wide range of subject matter related to Star Trek's Klingons. It is a general forum for all things Klingon. The KSF newsletter is, at the present time, a format for disseminating information about events and projects in the KSF. It will contain art and documents depending on the amount of material needed to be put forth. It will not contain material or content that the fanzine is already featuring such as I mentioned above. The two publications are distinct and separate and will remain so.

The KSF is an organization where the members can be what they want to be and do what they want - within the boundaries of the club guidelines. Those of you wishing to use the network as a correspondence club, will find many here to communicate with. Those of you wishing to contribute to the greater glory by writing articles, creating artwork, dreaming up and putting together new projects or even interacting with the opposing forces, will find your way to do these things unopposed and in fact, encouraged. You will find that the senior officers will try to keep each of you in regular communications and you should attempt to do so. A Klingon learns by doing. [1]

2. PROJECTS Get involved in production of a newsletter or fanzine (fiction, art, poetry, nonfiction/tech) or help plan (or start) something new!

3. PROJECT ASSISTANCE Do you write, draw, make models, work with computers, role-play, wargame, design ships, or do other imaginative things in the Klingon Universe - or do you want to? KSF members arc ready to provide information and help.

4. ROLE_PLAYING Give your Klingon Persona a chance to show what he/she did to deserve all that glory. The club-wide role-playing game needs you to help infiltrate the UFP; make technological breakthroughs and keep one step ahead of disaster. Play by mail via short, easily composed reports to others. Help create interesting story lines.

5. INFORMATION NETWORK Want to know who's going to be at a con, what the latest Trek novel is like or other scuttlebutt in fandom? Someone in the KSF probably knows and is waiting to share that information. Don't keep your Trek questions and experience to yourself!

6. INTERNATIONAL CONTACTS There are Klingons active in France, England, Germany, Netherlands, Canada and elsewhere on Terra. Expand your communication horizons and get a global perspective on fandom! For more information on any of these benefits, contact KSF Command today. The KSF is only as effective and worthwhile as those involved within it. There is no committee of officers that does everything in the Empire tradition of independent glory, you must act for yourself. Your letters and involvement keeps the Klingon pres ence alive in fandom!