Agonizer is a Star Trek: TOS letterzine/newsletter devoted to exploring aspects of Klingon culture through the lens of fandom. In addition to letters, articles, newspaper clippings and interviews it also contained fan art and poetry. It was originally published quarterly and then later went to annual publication. Each issue ran around 100 pages. [2]

The fanzine went on a long hiatus before it was revived in 2000.

I devote a big chunk of Agonizer to letters from friends and readers since most of the correspondence I get is related to the zine. I have made the mistake, though, of printing people's letters to me when they contain material I feel is of general interest to Klingon fandom or promotes the writer himself as an interesting person others might want to contact, without getting clearance first. Once or twice (mercifully not often!) I have received angry letters from someone whose letter I had used in this way. I have taken to asking for permission to use what newcomers have written to me before printing any of it. Live and learn. Guess I had assumed that anyone writing to a notorious zinemaker would not be shocked to find his (not personal) material going to good use. [1]

Agonizer v.2. n.2 was published in Spring 1990 and contains 124 pages. The front cover: "Kian Jirall with Agonizer," back cover: "Mudji and Kishin": Zuhl. 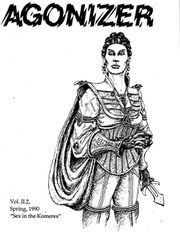 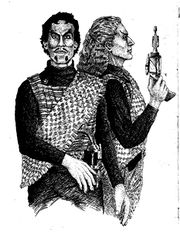 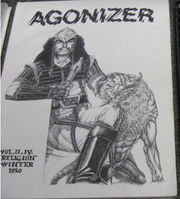 Agonizer v.3 n.1 has art by Gennie Summers. It was published in Spring 1991 and contains 70 pages. 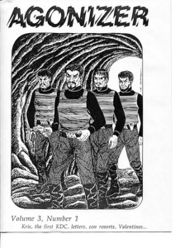 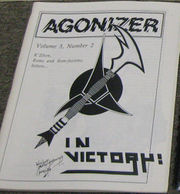 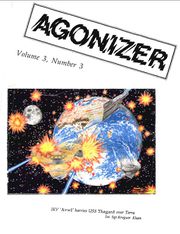 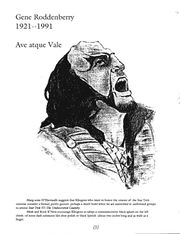 from v.3 n.2: "Marg sutai-H'Havraadh suggests that Klingons who want to honor the creator of the Star Trek universe consider a formal, public gesture: perhaps a death-howl when we are assembled in uniformed groups to attend Star Trek VI--The Undiscovered Country. Mrak and Koch K'Nera encourage Klingons to adopt a commemorative black splash on the left cheek--of some dark substance like shoe polish or black lipstick--about two inches long and as wide as a finger. 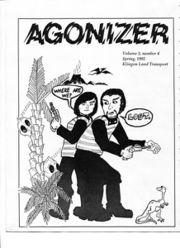 This issue has a special supplement: see Klin Zha. 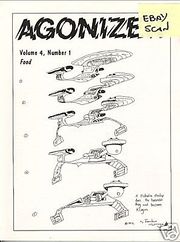 table of contents for issue #11

Given the fact that the Klingon empire is a military dictatorship populated by grunting, trigger-happy warriors with bad teeth, one might wonder why anyone would want to obsess over this dark quadrant of Trekdom as Sue Frank's gargantuan zine The Agonizer does. But with humans in the 24th century living in a kind of Kumbayah paradise, and the Federation one big happy cosmic family, embracing the wild and hot-blooded Klingons is an act of rebellion. Not to mention the fact that the Klingons have the cooler uniforms.

In this day and age of fancy, professionally produced zines, it's nice to be reminded what a "fanzine" was once all about; The Agonizer will knock you upside your head with its heavy devotion to those knot-headed space bikers, the Klingons. Every year or so, a 100-plus-page issue emerges, tediously crammed with letters, impressively bad fan art, photos, stories, newspaper clippings, and ponderous essays on Klingons of both the TV and live-action role-playing varieties. In early issues, Frank even took the time to paste in color photos of especially fetching Klingons decked out in full convention regalia.

Thumbing through page after page of Klingon speculations and no small amount of playful bravado from groups with names like The Klingon Attack Group, Klingon Strike Force, and The Klingon Language Institute may be bewildering to "mundanes" (those who don't subscribe to the Klingon faith.) But if you're just dying to slap on your Klingon battle knife and a ridged prosthetic forehead, you may be ready for The Agonizer. The most recent issue (#11, published in 1994) is on Klingon mysticism and magick and the next issue, on Klingon games, is in the works.

Agonizer v.5 n.1 (perplexingly called "Issue 12") was published in December 1999, contains 89 pages and has a theme of "Klingon Games". It contains many articles and 'boodless' or great art. The next issue was scheduled to appear in July 2000 with the theme is "Klingon Performing Arts and the Heroic Age." (As reported in the 2000 issue of 'Battle Lines'). A sample PDF copy of this issue can be found here. 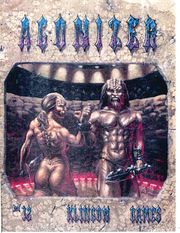 Agonizer v.13 was published in 2000 and contains 57 pages. A pdf copy of this issue can be viewed here.

Sample poem from an unspecified issue: [3]

The Naked Stars
… And though I had slain a thousand foes less one,

The thousandth knife had found my liver;

The thousandth enemy said to me

"Now you shall die, and none shall know."

And the fool looking down believed this,

Not seeing, above his shoulder,

Gallery of Some Pages from Unknown Issues