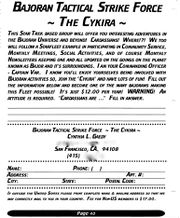 Each club formed a "ship." Two in California in the 1990s were "Nakiera" out of Visailia and "Cykira" out of San Francisco.

A similar club was the Klingon Assault Group.

Each club was an off-shoot of STARFLEET: The International Star Trek Fan Association, Inc., following that organization's structure and format.

From a 1994 flyer for "The Cykira": "This Star Trek based group will offer you interesting adventures in the Bajoran Universe and beyond! Cardassians! Where!?! We too will follow a Starfleet example in participating in community service, monthly meetings, social activities, and of course monthly newsletters keeping one and all updated on the goings on on the planet known as Bajor and it's [sic] surroundings. I am your Commanding Officer -- Captain Var. I know you'll enjoy yourselves being involved with Bajoran activities, so join the "Cykira" and have lots of fun! Fill out the information below and become one of the many Bajorans making this Fleet possible! It's just $12 per year! WARNING! An attitude is required. "Cardassians are..." Fill in answer."