From Fanlore
(Redirected from The Farthest Star)
Jump to: navigation, search

You may be looking for the Star Trek zine, Beyond the Farthest Star. 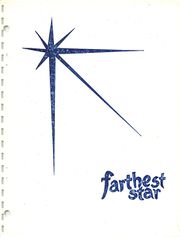 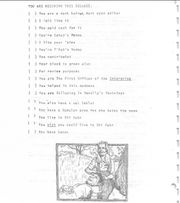 the You are Receiving this Zine Because page from issue #1, click to read

back cover issue one

Overall, I enjoyed this zine tremendously -- primarily, I think, because the editors chose to publish stories which dealt with new areas in ST fan fiction. ”Journey to Obsession” was the first Captain Garrovick story I had seen, and although I would have liked to have seen a bit more characterization attributed to James T. Kirk’s here, I found the experiment fascinating. I also enjoyed the Kevin O'Reilly story — mainly, I think, because of its obviously well-done research into Irish folklore.

In general, I thought all of the poetry throughout the zine was extremely well-done. I’d like to know how the editors got so many good pieces together! I also that that Amy Hartib’s Kllngon fashions were well-executed. They struck a responsive chord within me as relating to a military culture.

I was truly intrigued to read yet another sequel to "The Rack”. (NOTE: "All The King's Horses," which appears in FARTHEST STAR, is the authentic "RACK" sequel, having been written by the same author.) At this point, someone should do a collection. What struck me most about this story was the simple fact that J. Emily Vance created two new characters of her own, and both worked very well. There was one disappointment:. her ending provided an easy way out of a situation which I’d have liked to see developed further.

My one real criticism of the zine is the fact that — in the issue I read, at any rate — there were several pages where the print faded out. Readable, I assure you, but...

Total impression? Although I did not pay for the zine, having been sent a reviewer's copy, I would definitely say ”Well worth the price!” [1]

This was a crazy magazine and... this publisher always had a hard luck story of how difficult it was to produce. [3] 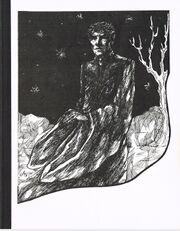 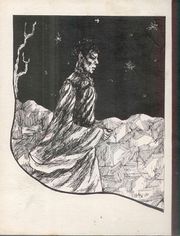 back cover by Mary Stacey McDonald

The trend of tardiness at the time, led to this issue being 18 months late. But they strove to create a touchable world of the mind. [4]

Scheduled [to be in this zine] was the long awaited 'Fire in the Mind,' of Juanita Salicrup's Christine and Spock [fourth chapter in the Crossroads begun in Stardate: Unknown] series. Unfortunately, according to the editorial, it is not in this volume and may never see print due to Juanita’s other commitments. This is disappointing, but FS2 stands up well without it. Entirely readable, somewhat reduced print make the 84 pages/7.65 FC price quite reasonable. Typos are few, the printing clean, the illos profuse and generally good. There is a nice, unified feel to it. One quarter of the zine is poetry and accompanying illos, and the layout varies from good to excellent… Some of the art is unsigned or unaccredited. The cartoons by Spivey are funny, the Mary Stacy-MacDonald illos are the best I’ve seen her do, and there are Alice Jones portraits of Kirk and Spock, stunning as always. The first of the five fiction pieces is ‘Heroes of the Unlit Sky,’ fatally flawed because it is never explained satisfactorily whey the Klingons make such elaborate plans to aid Hitler and destroy Earth’s future, or why Kirk and Spock (a Vulcan?) had to be the ones to go back and involve themselves in an equally elaborate and unlikely plan to counter them. Spock and Kirk are Royal Air Force pilots who manage to save the day. Spock shooting down other planes is disquieting, and there is the question of what he, a vegetarian, ate during the months of training while he was passing as a human. The saving grace of this story is the interaction between Kirk and Spock – there are some passages that give interesting insights into their relationship and almost save the story.

‘Time of Smoke’ was a well-written three-page mirror mirror universe story that seemed incomplete – just enough of a glimpse into the story to intrigue, not enough to satisfy. It was followed by ‘His First Command,’ a hilarious Kirk-and-Spock-meet-as-children tale. While not all the havoc they manage to create in an afternoon seems logically possible, the author has caught the essence of two little boys excellently. ‘All the Past is Prologue’ is a Surak story that considers his wife and child as well as the change he must bring to Vulcan. The plot is clear, the historical background interesting, and the ending is hopeful. The last story, the longest, is ‘This Above All.’ It blends Sarek with the secret new star drive, the Klingons who want it, Spock tortured to wring the truth from his father, and the Rom-Com, here named Selicia, to save the pair of them. The Romulan culture shown here is developed and believable, as is the Klingon culture we also get a glimpse of. The plot is complex, slightly disjointed at the beginning but quickly falling into place. Towards the end, it begins to waver as the author apparently can’t decide which of several excellent themes to emphasize, but all loose ends are wrapped up, and the ending is thoughtful.

This is a pretty good zine, of interest to Kirk and Spock fans, and well worth the price. [5]

This would be a good zine to recommend to the neofan, has several long stories by such well-known writers as Jean L. Stevenson, Eileen Roy, and P.S. Nim, a modest art folio which does not illo stories, numerous bits of poetry lavishly laid out with suitable artwork, and one good long story by the editor.

Imagine Kirk and Spock flying Spitfires with the Royal Canadian Air Force during WWII! Logical reasons necessitate their presence during this period to intercept a Klingon effort at changing history -- but I would sure love to see the "computer treatment guaranteed to disguise your ears and soften the shape of your eyebrows," as Kirk assures Spock. No doubt computers will be able to do some magical things in two hundred years, but this is stretching credibility to a breaking point. Once you swallow this though, the wondrous detail surrounding this adventure leaves no doubt that Pat knows her subject first hand, and it will hold your interest right up to the story's hairbreath conclusion.

A class zine, long awaited, and a good mate for the well-received #1 issue. [6]