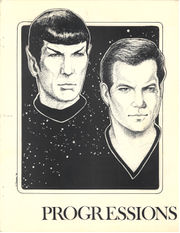 Progressions is a slash and gen 259-page anthology by Merle Decker. It contains art by Merle Decker, Suzan Lovett, Caren Parnes, Maureen B. and Gayle F.

Half the content is K/S (mature) and the other half deals with the friendship relationship between Kirk & Spock.

PROGRESSIONS, from the first, was planned to be a showcase for just one theme and one theme alone: the exploration of the Kirk/Spock relationship. I wanted it to show, not just one side, but all the possible ways in which their friendship/love could develop. About half the material within these pages deal with the K/S theme, while the remaining portion concerns their friendship. The whole is generously sprinkled with hurt/comfort or psychological studies. I hope that you, the reader and fellow fan, enjoy the following stories as much as I have.

I also want to thank all of my friends, both the old and the new, without whose help and encouragement PROGRESSIONS would never have been possible.

PROGRESSIONS has been a lot of work, but it has also been a very rewarding experience (not to say a lot of fun), one that I would not have missed.

See reactions and reviews for And In This Dream.

See reactions and reviews for Pentecost.

See reactions and reviews for A Learning Experience.

See reactions and reviews for And All the Dreams Have Turned to Dust...And Back to Dreams Again.

See reactions and reviews for Chimera.

See reactions and reviews for To the Dark Tower Came.

See reactions and reviews for Till Morning Comes.

See reactions and reviews for Beyond Trust.

[zine]: The Spectra of a Relationship. Merle Decker's introduction to her zine PROGRESSIONS states that "from the first, (it) was planned to be a showcase for just one theme ... the exploration of the Kirk/Spock relationship... to show not just one side but all the possible ways in which their friendship/love could develop." And PROGRESSIONS does just that. Often this reader has picked up a zine and found that, while excellent ideas abounded, the writing was inconsistent, truly vivid and complete in one part of the story and then suddenly thin and skimpy in another, a very frustrating experience. Not so with PROGRESSIONS. Every entry, whether it is simply a character study or a carefully constructed adventure, is complete, lacking no detail. The best example of this attention to quality is the last story, entitled "Beyond Trust." Set in the mirror universe, Ginna LaCroix' s Kirk is the target of an assasination plot launched by Admiral Komak, who fears the captain's growning power within the Empire. Ms. LaCroix manages to tell a compelling tale of intrigue, and within the action/adventure framework portrays a strong Kirk/Spock relationship, as well as the birth of trust between the mirror McCoy and Kirk. It keeps the reader's eyes sailing over each page. The author also throws in a few details that not only flesh out the characters and background, but that surprise and delight the reader. "... And In This Dream... ", by Dovya Blacque, is another first rate entry. Occurring soon after the captain's mind transferance with Janice Lester, Kirk as been having some rather interesting nightmares that lead to therapeutic volley with Dr. McCoy. Especially well-done in this piece are the characterizations: the voices, the responses, are genuine. McCoy's analysis of Kirk's dreams is more than credible one senses the professional here, just as one perceives acutely Kirk's growing discomfort, and Spock' s growing concern for his captain. These are just two examples from what is a really fine anthology. Other noteworthy entries: "A Learning Experience" by Lenore Moore (a satistying study of a firmly established K/S relationship wherein Kirk finds himself attracted to another man), "Chimera" by Susan K. James (a sort of history of Kirk learning to deal with and accept Spock's violent confession of his feelings), and Flora Poste's group of poems entitled "Progressions". Good writing and sensitive editing come together here for a varied reading experience. One interesting detail that runs through several stories is the connection of Kirk with the scent of sandalwood; one wonders about the origin of the association. It was a nice touch. The anthology includes some hurt/comfort, most notably "Pentecost." While this story is well-written and carefully thought out, it does become intense reading where Kirk's physical suffering is concerned. This is truer still of "Till Morning Comes", another piece by Ms. James. The story is really a character study of Kirk, her personal strength, his faith in his friends, and his physical and emotional agony before his death. The reader never finds out why he is where he is, or how he got there. But the reader does experience every ache, every cutting pain, every moment of despair and anguish that the character feels. Neither the captain nor the audience is spared or relieved for a moment. While the editor obviously felt that "Till Morning Comes" was appropriate to the purpose of the anthology, its purpose is not readily apparent to the reader; it is virtually the only piece in the collection that the reviewer took exception to. In both "Pentecost" and "Till Morning Comes", the writing is vivid, perhaps too vivid for the subject matter. Empathetic readers may not want to experience these adventures. The illos and graphics in PROGRESSIONS are all very fine and beautifully reproduced. Worthy of study are Caren Parnes' portrait of Kirk on page 236, the portrayal of Kirk's nightmare by [Maureen B.] on page 147, and the lovely glimpse of Spock and Kirk which can be found beneath the editor's note at the front of the zine. All in all, PROGRESSIONS does what Ms. Decker intended it to do: to study the spectra of the K/S relationship in many different aspects. Even with the noted exceptions, the zine is good reading enhanced by well-executed artwork, and I recommend it highly. [1]

PROGRESSIONS is a some-K/S, some friendship & hurt-comfort zine. I ordered it mostly because of Gina LaCroix's "Beyond Trust," a Mirror-universe K/S. I wanted to see how that would work out. I am not quite convinced that the ISS ENTERPRISE'S crew would be as unseeing as LaCroix implies they are. However, I liked the two-against-the-admiralty portrayl, and I loved the two excellent Mirror Kirk & Spock portraits by Caren Parnes. I'm still not sure what I think of "A Learning Experience" by Lanora Moore. Coming in on a universe and a K/S relationship that has been developed in three volumes before the story is frustrating. "Chimera" by Susan K. James is a Pon Farr story that explores Kirk and Spock's reactions and eventual reconcilement afterwards. All in all, a fairly believable story, and well thought out. "And In This Dream" by Dovya Blacque has Kirk's dreaming subconscious working double-time after "Turnabout Intruder." The rest of the stories are good quality hurt- comfort-rescue, which tend to stick in the mind longer than the usual story of that vein. [2]