A Gathering of Blacque 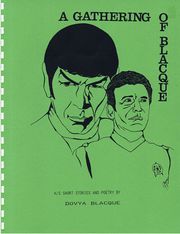 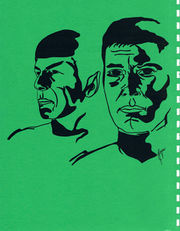 back cover, by Alayne

A Gathering of Blacque is a slash 114-page anthology of K/S fiction and poetry by Dovya Blacque. The art is by Alayne, the "doodads & story borders" by Chiya.

This zine was a sort of brainstorm that took off was completed within one month. Dovya came through beautifully with the two new stories and the minor rewrites on the two reprints. I hope you enjoy this zine as much as we've enjoyed putting it together for you.

Since this is Dovya's zine, I don't have much to say... but she does (see the "Author's Note"). I would like to thank both Chiya and Alayne for work above and beyond in a short period of time (some of the story borders are reprints, too). I would also like to thank the editors of both TWIN DESTINY and PROGRESSIONS for their understanding about the reprints. Everything else in this zine is printed here for the first time. Mostly, I'd like to thank Dovya, whose work inspired and fills this zine. Thanks, Kiddo... now, where's the novel?

Back in 1983/1984, some of you may have become aware that a K/S fan in Australia had been invited on to a nationally broadcast radio program and that she read a K/S story, complete with the author's name, over said radio program. That story was mine, the very A TIME FOR EVERYONE you now hold in your hands. It follows that the author, whose name was read over national radio in connection with a K/S story was me. That was the end of my using my real name in K/S. Why? Well....

Suppose, just suppose, someone had read that story, or any K/S story, over nationally broadcast American radio program? Do you think Paramount would be thrilled by that...or with the author? K/S is an underground genre. We've done our best to keep it that way. Granted, certain people, who need not be named here, and publications like L.A. WEEKLY and a Denver, Colorado newspaper (both of which have published articles on K/S in recent months, both of which have printed K/S illustrations with those articles -- one ([ Gayle F ], one TACS) have made it difficult to keep K/S underground, but the last thing we need is that kind of 'help' from 'our own people'. I won't even go into the fact that this person in Australia broke every copyright involved by reading my story in a public forum without my knowledge, let alone my permission. No doubt, this person did not intend to cause trouble, but putting K/S in view of the general public does nothing else but cause trouble for everyone involved.

I'm far from ashamed of K/S or of writing or reading it. But we all have to live in the real world and facts is facts. Writing K/S and having it known by people at Paramount or by the actors or by some radically 'moral' minority can be very detrimental to one's career...to say nothing of one's life. And since quite a few of us have illusions of writing more than fan stories someday.... Well, enough said about the merits of pen names.

2nd reprint in this zine is A STRANGE AND BEAUTIFUL FLOWER...though it has never been printed under that title. It appeared in PROGRESSIONS in 1985 under the title ...AND IN THIS DREAM..,. The reasons for changing the title are too picayune to go into. Those reasons have nothing what-so-ever to do with PROGRESSIONS or its editor.

The fourth story printed here is "LOVE AND LOGIC" and is seen here (as is AND EVERYONE IN THEIR TIME) for the first time.

I'd like to thank the editors of both TWIN DESTINY and PROGRESSIONS for, first, printing these stories and, second, for being understanding about the reprints. I guess I'd better thank my nameless editor, too. She's been a great help with this project and has pretty much stayed off my back about the novel for a few months. I'd also like to thank my artists who came into this project kicking and screaming...and are still kicking and screaming! Thanks, girls. It's been real....

See reactions and reviews for "Love and Logic".

See reactions and reviews for A Strange & Beautiful Flower.

See reactions and reviews for A Time for Everyone.

See reactions and reviews for And Everyone in Their Time.