Formazine is a gen Star Trek: TOS anthology. The Fanzine Archives lists the editors as "Patsy Curnow & Chanack." It is subtitled: "A Light Stimulant." This zine is 8.5 x 11.

FORMAZINE is a series of zines for just the light reading of Star Trek fans. #5 is still [missing word?] with its visual standards with their moral support from their readers. #5 is out now, and there are some wonderful light reading along with some silliness involved. And at a good price. I have all 5 issues with more to come, but to only once a year.[1] 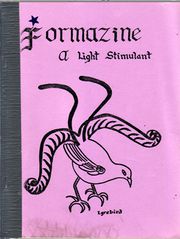 Formazine 1 contains 134 pages and was published in 1986. It has art by Patsy Curnow.

From an ad in Datazine #57: "Fresh thoughts on old, sweet memories."

Formazine is a first-time effort by Patsy Curnow and Linda Chanack, two girls from Texas. I heard about it from a flyer enclosed in another zine that I ordered from Datazine. It sounded interesting and the price of $8.95 sounded even better. I was not disappointed, and there is going to be a Formazine II. Being a McCoy fan, my favorite story in the zine is called "In Days of Old," by Marie Gunn. Some Romulas have found the Guardian planet and we open on them fighting with the Enterprise crew. While fighting near the front of the Guardian, McCoy, Sulu, and a young Romulan soldier are propelled into the 14th century, where they have to cope with knights. Sulu learns to joust, and McCoy is a healer that must keep the Romulan's ears covered to avoided to avoid discover. Spock and Kirk come to their their friends' rescue as a monk and Sir Jameskirk; yes it is a bit illogical but it is fun. I have always liked the King Arthur period and Marie does a 'good job with it. '

The artwork in the zine is ail done by Patsy Curnow who also contributes "From Thunders Violence," a very different post-Search for Spock story. It will give you a new perspective on our characters, especially since Star Trek IV Isn't anything like it. Linda has also contributed "T'Alis in Spock's Land" in which we find that Spock has remembered the stories that Amanda told him as a child. He can tell a fairy tale if it is needed.

Formazine is a labor of love by Linda and Patsy and a very good first-time effort.[2]

From The Trek Fan's Handbook: "Stonn and T'Pring's marriage. A Christmas story of caring and compassion centered on Uhura. McCoy dragged through a tunnel by a laughing spider. Kirk, McCoy and Chapel hiding on a planet of giant bisexuals. Plus artwork, poetry and more adventures." 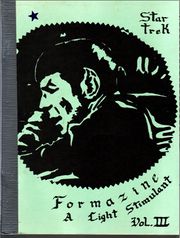 From an ad in Datazine #57: "This volume is filled with McCoy stories including a follow-up to "Rosebud Filled With Snow" from #3. Kirk is stuck with another bride to deliver and you are re-introduced to the Gorns. Plus artwork, cartoons, and more." 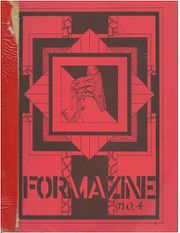 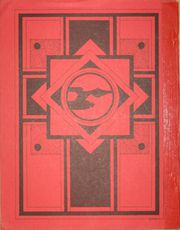 Formazine 5 was published in 1989 and contains 161 pages. The front and back covers are by Teegar.

From an ad in Datazine #57: "This volume features a lengthy story of friendship & caring, a hilarious satire of our favorite crew, more problems for Kirk and Crew, both amusing and intriguing, plus artwork and much more.'" 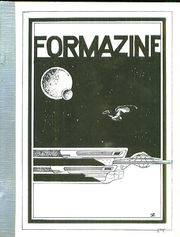 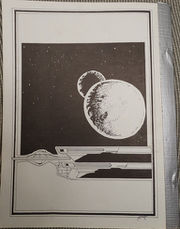 back cover of issue #5, Teegar