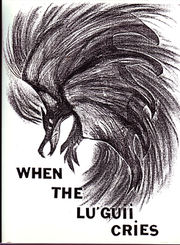 When the Lu'guii Cries is a gen Star Trek: TOS 207-page novel by Rowena D. Warner. It is illustrated by Jackie M. Zoost. The story is about Vulcans who scorn IDIC

I have written a Star Trek novel and submitted it to Pocketbooks only to discover they now longer accept unsolicited manuscripts. This means I now have a story on my hands, and I'm not certain what to do with it... The timeline for the story is just prior to 'Wrath of Khan.' Kirk and Spock take R&R on Vulcan and are joined by the rest of the bridge crew. After a very casual and hopefully humorous beginning, a disruption in the idyllic vacation occurs when Spock is kidnapped and in subsequent pages, we are introduced to the Koonyah, a small faction of Vulcans who scorn the philosophy of IDIC. I'll be totally honest here and admit that I also submitted this manuscript to an agent, and it was turned down because he did not feel it was marketable in the narrow field of ST. After presenting these facts, my question to you is this: would anyone like to see this story published as a zine? No, don't send me any money; I don't operate that way. Just drop me an SASE if you really feel you'd be interested. If I receive 50 SASEs, I'll go to press. [1]

When the Lu’gii Cries' is a ‘zine for those who like novel-length, Vulcan-oriented stories without the slightest hint of K/S, but that reveal another fan’s view of Vulcans. WTLC is set after TWOK, when the E is laid up at Vulcan for refitting and McCoy, Kirk, and Scotty stay with Spock at home with Amanda and Sarek. The ‘action’ is provided by a little-known Vulcan sect, the Koonyah, which has just a few dozen members scattered about the world. However, they have a new leader, an old enemy of Spock’s, who makes Sarek the main target of a vicious plot. Yes, violent and vicious Vulcans.

But the most intriguing thing for me was in the author’s introduction. She says, “… this novel was turned down by the Scott Meredith Literary Agency. I discovered he, too, is a Trekkie. His word, not mine. And as such, has his own strong views about the characters. He said, “basically, you have to appeal to dyed-in-the-wool Trekkies, and this script doesn’t do that.” I put my neck in the noose, and decided to give it a try anyway. His major objection to the novel was the Koonyah – he felt if they really existed on Vulcan, we’d already know about them. I obviously have my own feelings on that, but I’ll leave it up to you to decide.” Well, being how I [the reviewer] am a client of the Scott Meredith Agency, but have never met Scott himself nor heard he had any affinity for Trek, I HAD to take up that challenge to decide for myself why he had turned this one down. My own Agent at Scott Meredith has sold many Trek novels for his clients. I HAD to see what Scott objected to in this novel. (Later, I found out that Rowena had never dealt with Scott Meredith himself, but with the Agency’s fee-paid evaluation service done over Scott Meredith’s signature.) I discovered immediately that ‘his’ objections couldn’t be to the Koonyah. There are so few of them, and they have been dormant for 30 years. As dissenters to Surak’s Reformation, they have retained an ancient attitude toward aggression and violence as well as the primal Vulcan emotions. As a conflict-generating device, the Koonyah are perfect. So, what’s the problem? Reading a little further, I soon discovered one of them. It’s a surface problem and easily fixed, but a professional Agent might not see it as such. It is indeed the ‘emotionalism’ of Rowena’s Vulcans, which struck different test readers different ways. The author did not know what to do with these responses except to conclude that people see the ST characters different ways. She derived the post-TWOK Spock (and Sarek) carefully and logically, and came up with a set of responses they would have to the situation of being victims of the vicious Koonyah plot. Rowena believed her test readers were responding to her research and logic, not to her writing skills. Throughout the novel, emotions are named, described, and labeled. They are only ‘shown’ through dialogue that names them, or worse yet, relies totally on Terran clichés. The emotions are named are often inappropriate. Rage, vengeance, anger, and hatred are the main constituents of Spock’s and Sarek’s reactions to being victimized by the Koonyah. Psych tests say rage, hatred, and vengeance are the reactions of those who feel helpless and hopeless. At the moments when the Vulcan characters name but do not express these feelings, they’re not helpless or hopeless, but engaged in aggressive attack with every expectation of success. So, as a reader, I don’t BELIEVE the name emotions. The technique that solves this problem is to replace every emotion name with a business (not dialogue). ‘Business’ is the stage term for lighting a cigarette, or in ST, Spock’s crushing a computer terminal. It’s ‘show don’t tell.’

There are several other easily fixed flaws in this novel, but space prohibits discussion. Despite them, I recommend WTLC enthusiastically, and would be glad to send a copy of my full analysis to anyone who sends me a large, 2-stamped SASE. [2]

"When the Lu'guii Cries" is a very interesting novel by Rowena Warner. This is not the first work of Rowena's that I have read but is the best so far. It takes place on Vulcan before The Wrath of Khan. Kirk is an Admiral and Spock is the Captain of the Enterprise. She has put in to Vulcan in order to have a new impulse auxiliary system installed. It will take 26.8 days, so guess where shore leave is spent?

Some of the crew shuttle to Episiloni Urad for the Festival of the Stars. Uhura, Sulu, Chekov, and Scotty stay on Vulcan, and Spock offers the hospitality of his parent's home to Kirk and McCoy.

Anyone who has read Jean Lorrah's Sarek and Amanda series is going to love this story because we get to see a new side of Sarek. Spock and Sarek have gotten over their feud that was resolving in Journey to Babel and we get to see how atypical a Vulcan Sarek really is. After all, we all knew he was atypical when he married Amanda. Yes, Vulcans do have emotions, especially anger when something is threatening his family.

"When the Lu'guii Cries; a Vulcan Dies", is the saying, and it proves true in this story. Apparently there is a sect of Vulcans called the Koonyah, sort of a Vulcan Mafia. They are really bad guys, their only emotions are ones of hatred, murder, and revenge.

Sarek had run into them seventeen years ago and had bested them. They are trying to enact revenge on him while kidnapping Spock for information about a new process of research on mind-melding techniques. Yes, it is a Spock. Get-um.

The head of the Koonyah is a member of Spock's clan and his old nemesis from childhood. He sets Spock up with a lovely Vulcan female, Ta'Lai, whom Spock falls for and the intrigue continues.

Jackie Zoost, the artist, has done a very good job of capturing our favorite Star Trek favorites. You can see the animosity emanating from Stauk, Spock's cousin, and the leader of the Koonyah. This zine is fast-moving, exciting, and has everything I enjoy in a zine, including romance.

There was some criticism of Rowena's work in that the Vulcans were too emotional, especially Sarek. Anyone that has seen Mark Lenard's wonderful portrayal in Star Trek IV, cannot question it. We all know he has emotions but keeps them under tight control. I find the criticism unfounded. His character was well-written and believable.

This zine is available from Rowena Warner [address redacted] for $14.25, first class. If you care anything at all about Vulcans, get  this. [3]