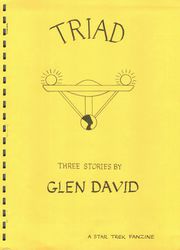 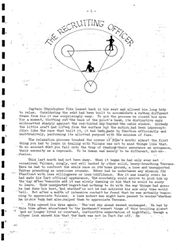 Triad is a gen 99-page collection of three Star Trek: TOS stories by Glen David. It was published in the U.K. There were 150 copies printed in the first print run.

From an ad in Universal Translator #17: "A trio of stories about the adventures of a Welshman aboard the Enterprise."

Triad is a three-story Zine by Glen David, published by Empathy. A well presented and turned out zine, Triad is 99 pages in length with no illustrations.

The three stories in 'Triad' each have a story line which is slightly off centre from the series. They either fill in gaps which were never explained in the episodes or they explain events from a different point of view.

'The Recruiting Officer' has Chris Pike as its central character, sent to Vulcan on a lecture tour to try to increase the number of Vulcans entering Star Fleet. The story begins while Pike is waiting to take over command of the Enterprise and continues when he is Captain. On Vulcan, Pike meets Spock, then a student at the Science Academy. Spock has already partly decided that his future lies in Star Fleet; Pike makes the final decision easier.

'Quite Reasonable Odds' finds the USS Farragut being refitted at a Star Base after its encounter Kith the cloud and the death of Captain Garrovick and half of the crew. Lt. Kirk is given the job of picking up an Enterprise survey team stranded after the Enterprise has been delayed on their previous mission. Lt. Spock is the only surviving member of the team and atmospheric interference means that contact with the shuttle is impossible. Kirk is now stranded also. For three days the two men have to work together to survive the worsening weather conditions, not an easy task as Kirk is suffering from guilt over what he considers his inaction at firing at the cloud and therefore contributing to Garrovick's death. However a dawning respect for each other's abilities is awakened by the time they are rescued,

'Nefertiti' is the longest of the three stories, beginning after the death of  Gary- Mitchell. It is an excellent story concerning Kirk's attempt to come to terms  with the loss of his friend combined with his efforts to get to know his ship and  his crew. For me, however, the integration into the story of the explanations for  various anomalies in the series were the best parts. Why do the uniforms change?  Why do the women stop wearing trousers and wear dresses instead and most important  why does Spock begin the series by being emotional, such as when he shouts on the  bridge, and suddenly lose that emotion? All these differences are given most plausable explanations within the frame work of the overall story.

I really enjoyed the three, stories. In fact it's one of the best Gen. Zines I've read in a long time. The style is fluid, leading the reader on easily from one incident to another. This is the second zine by this writer that I have enjoyed. The other, "Offstage Enterprise", about series incidents seen through the eyes of a junior crew member. I can also recommend.

It has to be stressed that this writer does not always have the usual characters centre stage and if that is the kind of story that appeals to you then you will be disappointed. If however ever you enjoy a good story, well written then in my opinion Triad is worth reading. [1]

Glen David's "Triad" has one story about how Captain Pike goes to Vulcan to recruit Vulcans for Starfleet and finds one pair of pointed ears very willing to listen; one story tells of the wet and muddy first meeting of young lieutenants Kirk and Spock on a planetary survey; and the last story deals with Kirk's first time on the ENTERPRISE and his coming to terms with the varied problems, ranging from the ventilation vent in the cabin toilet, which is connected to one of the private lounges and therefore seems to whisper endearments to the startled occupant, to his relationship with the enigmatic Spock, of whom Captain Pike had warned him: "After a time you may find that you come to like him. It is important not to try to do anything about this; it's just a thing you have to live with." Which is exactly what Captain Kirk decides to do. [2]